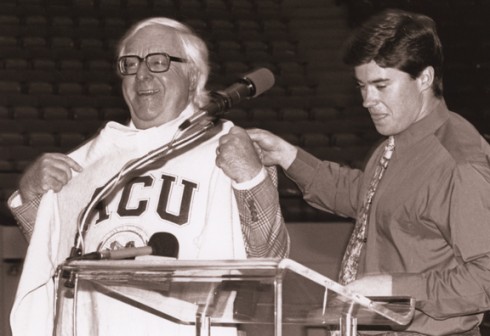 Abilene Christian University professors remember the visit science fiction writer Ray Bradbury made to campus in 1992 as part of the Students’ Association Major Speaker Series, as Brian Bethel’s story in the Abilene Reporter-News describes.
Bradbury, 91, died Tuesday in Los Angeles after a lengthy illness and a writing career that spanned more than seven decades.
“If you don’t use the gift you have, it’s a sin,” he told the crowd in Moody Coliseum that March evening in 1992. “If you have a talent and you’re not using it, there’s no excuse.” The author of Fahrenheit 451, Dandelion Wine,  The Martian Chronicles and Something Wicked This Way Comes told the audience to ask themselves, “What can I do to improve the lot of mankind?”
Bradbury surely did that with his gifted writing for theatre, TV, films, books and magazines. Along the way, he won an Emmy, the National Book Foundation Medal for Distinguished Contribution to American Letters, the National Medal of Arts, and the Pulitzer Prize Special Citation, among other honors. He taught people about the wonders of the universe, helping Disney create its iconic Spaceship Earth at the Epcot Center in Orlando, Fla.
According to an anecdote on his website, Bradbury talked often of his fascination as a young boy with magic and magicians. He met one – Mr. Electrico – at a carnival in 1932:

“At the end of his performance, Electrico reached out to the 12-year-old Bradbury, touched the boy with his sword, and commanded, ‘Live forever!’ Bradbury later said, ‘I decided that was the greatest idea I had ever heard. I started writing every day. I never stopped.’ ”

SA president Brent McCall (’92) presented Bradbury with an ACU sweatshirt (see image above), and the author autographed books at a reception for students and faculty for nearly two hours after his speech.