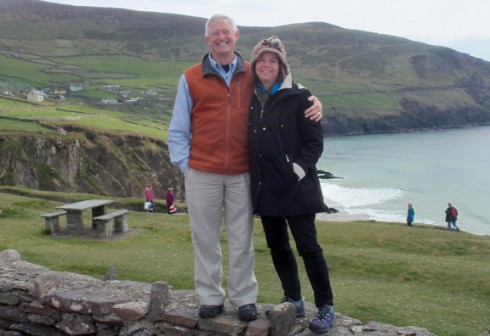 If you don’t think we live in a small world inhabited by more Abilene Christian University people than you’d imagine, just ask Albert (’71) and Vicki (Rushing ’74) Dennington of Austin, who shared a fascinating story about an afternoon on their recent 40th wedding anniversary trip to Ireland:

Just as a picture doesn’t show the true depth of the vista, so words don’t do justice to the richness of the event. After departing Mizen Head, the southern most part of Ireland, the rain, wind and cold forced our group indoors for lunch at O’Sullivan’s Pub in the small fishing village of Crookhaven.
A boat with four Irishmen moored at the same time, seeking warmth and victuals. The pub was heated by a fireplace and, after a meal of seafood chowder for Vicki and squash and cheese soup for me, supplemented by hot chocolate with some Irish stew, one in our group pulled out the lone guitar and a “sing-song” broke out in loud chorus to liven the spirits.


One of the Irishmen, Gerald O’Flynn, asked if any of us Yanks were from Texas, so Vicki and I held up our hands. He asked if we knew of Abilene, for his daughter Jerri (O’Flynn ’95) Innes had gone to school at Abilene Christian on a basketball scholarship. When she was offered the scholarship, Gerald said he traveled to Abilene and met with 45-degree Celsius temperature (113 degrees Farenheit) and the president of the university to make sure this Protestant college had no hidden agenda concerning his Catholic daughter. President (Royce ’64) Money (now chancellor) assured him she would get a good Christian education without bias, and ACU had stood true to his word.
We bonded instantly. After another song, he stood and said he was a bit of a storyteller and his daughter who now lives in Glasgow, would never forgive him if he didn’t recite. He captured the pub with his tale of one Michael the Farmer who was desperately trying to marry one of his “tree datters to ta school teacher” to ultimate success. After belly clutching laughter and another song by us, his fellow Irishman friend treated us to a couple of traditional Irish a cappella songs, followed by another story of a boy left to run the local pharmacy while the chemist attended a funeral. It was a prescription for more laughter.
A few more songs and the bus driver said it was four o’clock and the day was gone; we must depart. The Irishmen went to their boat and we boarded our bus. The ingredients of this afternoon’s “warming Irish stew” can never be replicated, but the memory of its taste will be enjoyed by all who shared it for quite some time.
Thanks, ACU.

Albert is the CEO of Passport Health in Austin/San Antonio. Vicki is an administrative assistant in the dean’s office at The University of Texas at Austin School of Nursing. They met during her freshman and his senior year at ACU, and married two years later. Tunisia (Sekhon ’81) Singleton, ACU’s university relations manager for Austin, says the Denningtons are loyal and active alumni in Texas’ capital city. They also recently provided a summer internship for ACU student Ethan Olsen at Passport Health.
Jerri played basketball three years for the Wildcats and was a former captain and Player of the Year for Ireland’s under-17 national team.