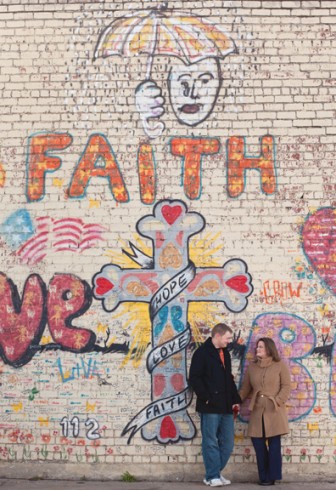 A year ago tomorrow, the world Josh (’06  M.A.C.M.) and Anna (Radomsky ’07) Edwards knew was turned upside down. They had just begun a vacation in Florida when alerted by friends back home that a bad storm had struck their hometown of Joplin, Mo.
Josh thought it a practical joke at first, but soon learned the grim truth: their house was flattened, their minivan in the driveway was totaled. The EF5 tornado that damaged more than 30 percent of Joplin killed 161 people, injured more than 1,000 and destroyed 8,500 houses and businesses.
In the days and weeks that followed, Anna kept a blog of her reflections, Tornado Blessings, and posts such as this on Josh’s blog provided his insights. Both are humbling reminders of the power of nature and the greater power of friendship, grace and God’s healing.
Tonight, President Barack Obama will be the graduation speaker at Joplin High School, which was destroyed in the tornado. Six of the 10 school buildings in the district were damaged beyond repair, affecting more than 4,200 students. Seven students and one staff member lost their lives. Students attended classes during the 2011-12 academic year at various temporary locations around the city while work began on building new facilities and repairing others.
The City of Joplin will observe a Day of Unity tomorrow, the one-year anniversary of the storm.
In the Winter 2012 issue of ACU Today, we recount Josh and Anna’s story of dealing with a life-altering natural disaster and the hope of a new start. The couple now lives in Pennsylvania, hopefully far away from the reasons why Joplin’s corner of the nation is called “Tornado Alley.”
Many thanks to photographer Whitney Scott, the wife of David Scott (’94), for this photo and others she provided in our Joplin Diaries series in June 2012.
You can read our story here:
[issuu width=420 height=269 pageNumber=88 backgroundColor=%23222222 documentId=120516190238-69f5ec2fd5ff40adb7626b5e24050ba9 name=acu_today_winter_2012 username=abilenechristian tag=acu unit=px v=2]