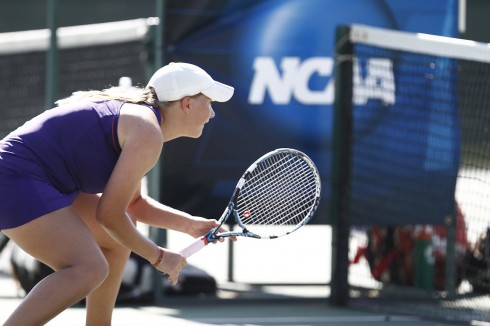 Another successful year for Abilene Christian University athletics is coming to a close, with the track and field teams the last to compete in NCAA post-season action, beginning next Thursday. A wrap-up of the results:
This week the women’s tennis team advanced to the NCAA semifinals for the third time in their history, losing 5-0 to Division II juggernaut BYU-Hawaii. The Seasiders (31-1) eventually lost in the national title match to Armstrong Atlantic (29-0), while the Wildcats finished 26-4 (19-1 against Division II foes) and ranked sixth in the nation.
The 11th-ranked men’s tennis team fell in the NCAA quarterfinals to No. 3 Lynn University, 5-3. Hans Hach finished with a 24-4 record at No. 1 singles, losing only to four of the top performers in NCAA Division I. The Wildcats were 21-9 overall.
Hutton Jones (’81) coached both tennis teams to regional titles.
Head coach Bobby Reeves and his women’s softball team lost in the NCAA South Central region tournament when Emporia State University claimed a 5-1 walk-off win via a 10th-inning grand slam. The Wildcats (30-18) made their fifth regional tournament appearance in the last eight years.
Nick Jones, who is ranked No. 1 in the nation in the discus and shot put, headlines the Wildcats’ qualifiers in the NCAA outdoor track and field championships this coming week in Pueblo, Colo. Twenty ACU student-athletes – 11 men (11 events and two relays) and eight women (seven events and two relays) – will compete in the meet, which runs May 24-26. The men’s team is the defending national outdoor champion and Jones will be attempting to become the first male athlete in NCAA history to win four national discus titles in a career. You can follow the championship meet action here.
Jones has qualified for the U.S. Olympic Trials, June 22 – July 1 in Eugene, Ore.
Only four universities – including UCLA, Stanford and USC – have won more NCAA team national championships than ACU.