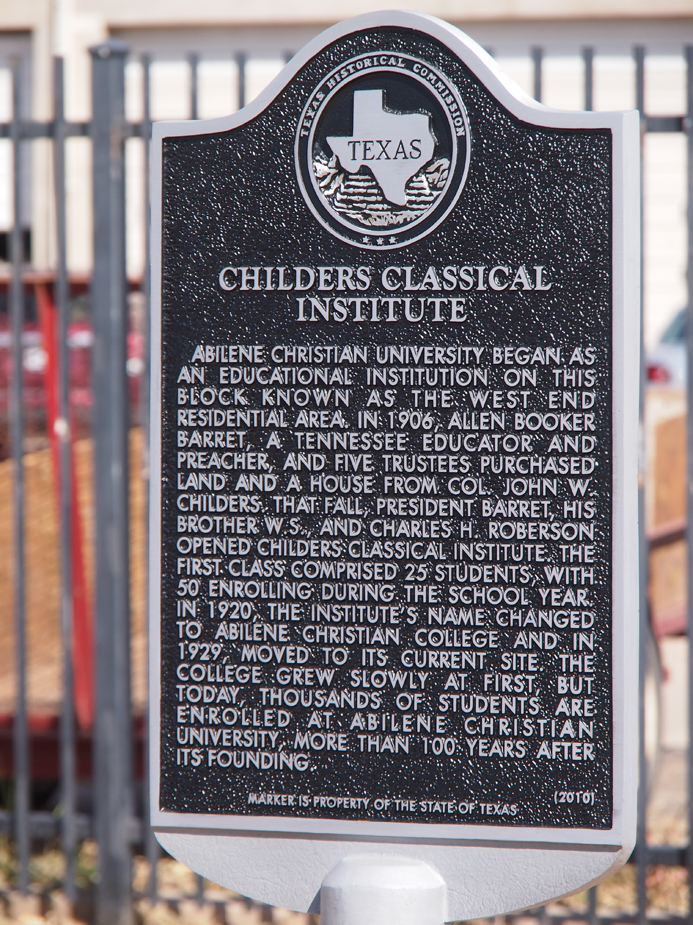 A.B. Barret was just 27 years old when his school, Childers Classical Institute, began classes with 25 students on North First Street in Abilene in 1906. One hundred and six years later, it’s known as Abilene Christian University, and the campus of about 4,600 students is a landmark a few miles northeast of its original location.

Last summer, some thoughtful alumni in Tennessee and Texas worked hard to help ensure Barret’s innovation and their alma mater’s roots will not soon be forgotten.
In “The Signs of His Times,” the Second Glance essay in the new Winter 2012 issue of ACU Today, you can read the story of efforts to recognize Barrett.
Al Price (’63) of Henderson, Tenn., led a group of alumni who paid for a new, larger headstone to mark Barret’s grave in Price’s hometown. The headstone now includes an acknowledgment of Barret as ACU’s founder and displays the logo of the university he founded.
Bruce Campbell (’68) attended Abilene Christian from kindergarten (Abilene Christian Schools) through the year he graduated from ACU with a bachelor’s degree. In 1982, a Texas Historical Commission marker was placed in front of the Hardin Administration Building on Campus Court, but Campbell began to wonder why the original site of Childers Classical Institute (CCI) was never noted. The Taylor County Historical Commission agreed, and the two worked together to petition the state for a marker on ACU’s first campus. Fast forward to Sept. 30, 2011, when university alumni and friends gathered to dedicate one on the property of Global Samaritan Resources Inc.
GSR’s headquarters are on land where ACU’s first administration building once faced the railroad tracks dividing North First and South First streets in Abilene. One of the speakers at the dedication was Mark Childers, a Waco agent for the U.S. Secret Service who is the great-grandson of Col. John W. Childers. The name of CCI’s namesake was added to Barret’s new school in partial payment for the use of his land in 1906.
Read more here:
[issuu width=420 height=269 pageNumber=95 backgroundColor=%23222222 documentId=120516190238-69f5ec2fd5ff40adb7626b5e24050ba9 name=acu_today_winter_2012 username=abilenechristian tag=acu unit=px v=2]
PREVIOUS POST   NEXT POST
SHARE: