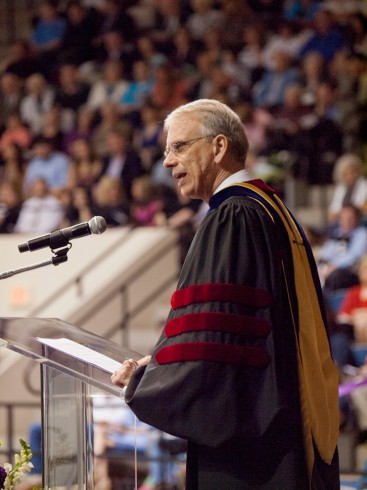 Dr. Jack Reese (’71), dean of the College of Biblical Studies and the Graduate School of Theology, and professor of preaching and worship, was the featured speaker at Saturday’s May Commencement at Abilene Christian University.
As it has for several years, ACU held ceremonies at 11 a.m. and 3 p.m. during its May event – the largest of three held each year – to accommodate the family and friends of graduates. Seven hundred and twenty-five new alumni were recognized yesterday in Moody Coliseum.
Reese has served three terms as dean of the College of Biblical Studies since 1997 but announced in late February that he would not seek a fourth. He will return to full-time teaching after completion of a research project for the university.
His message yesterday was titled “Making Humans”: