Final exams begin this week at Abilene Christian University, when reflections upon how another school year could go by so amazingly fast (or enormously slow, depending on one’s viewpoint) begin in earnest.
Last week, students heard different perspectives on the school year from the Senior Speakers who presented in Chapel: Noemi Palomares, Kyle Ferrell, Keri Gray and Matt Anderson. This Saturday’s Commencement speaker will be outgoing College of Biblical Studies dean Dr. Jack Reese (’73).
While recently looking through some of the earliest editions of the Prickly Pear yearbook, I found Jesse P. Sewell’s “Message from the President” concluding the 1922-23 school year and thought it to be a pretty applicable overview of 2012-13 as well. Some of the word usage is a bit archaic, given that it was written 90 years ago, but the sentiment travels well:

Another year in the life of Abilene Christian College has drawn to its close. As I look back over it I see both joys and sorrows intermingled – the joys of seeing so many of you, our boys and girls, enjoying the blessings of Christian education and appropriating to yourselves the highest culture and education attainable: the regrets of realizing that our efforts have not been altogether successful and that our hopes have not been completely realized. 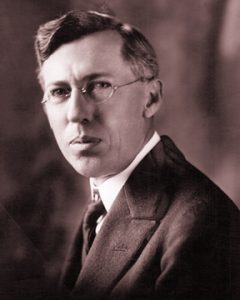 In this final message to you I have but one thing to say. I have endeavored to impress it upon you in the pulpit, in the chapel hall, and everywhere else. The splendid corps of teachers whose association and instruction you have received have emphasized it in the classroom, in the campus and on the field of athletic conquest. It is the one thing for which your college – your alma mater – exists. If this ever departs from the ideal and the purposes of ‘Dear Old A.C.C.’ it were better that the walls of her buildings crumble into dust, its grounds become the dwelling place of wild beasts, and Abilene Christian College exist only in the memories of those who knew her former years.
It is a simple message but vastly more important than any other I could possibly give you. If you heed it, you will be both happy and successful; and all that you can desire will be yours, both in this life and the life to come. If you fail to heed it no mater what you achieve or become, all will be ‘vanity and vexation of spirit.’
Here it is: There is but one thing in life worthwhile; attain it and and you have attained all; miss it and you have missed all. It is faith in the Lord Jesus Christ and obedience to Him in all things.
Sincerely and fraternally,
J.P. SEWELL

Sewell was president from 1912-24, when Abilene Christian’s campus was located on North First Street. (It moved to its current location in 1929.) ACU’s auditorium, which later became a theatre until the Williams Performing Arts Center was built in 2003, was named after Jesse and his wife, Daisy.
Is there advice you remember most from the Commencement address presented at your graduation?