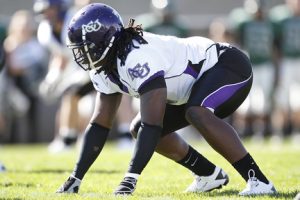 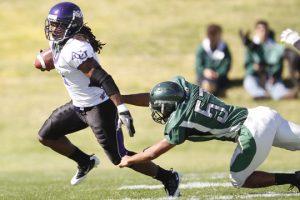 Daryl Richardson and Aston Whiteside became the latest former Abilene Christian University standouts to head to the NFL when the St. Louis Rams and Dallas Cowboys came calling Saturday afternoon.
Richardson, a running back, was selected in the seventh round by the Rams and Whiteside, who was a dominator at defensive end in college but could play one of four positions as a pro, agreed to a free agent deal with the Cowboys at the conclusion of the 2012 Draft. Richardson is ACU’s fifth-leading career rusher, scored the second most touchdowns in school history, and has been timed at 4.45 in the 40-yard dash. Whiteside was named to every major all-America team after his senior season in 2011.
Fifteen NFL teams sent scouts to Abilene to watch seven Wildcats work out during Pro Day on April 3. As of late Saturday night, two more of them had been invited by NFL rival teams to their respective three-day free-agent minicamps this weekend. Offensive tackle Neal Tivis will work out for the Dallas Cowboys at Valley Ranch in Irving, Texas, and tight end Ben Gibbs will participate in the Washington Redskins’ event in Ashburn, Va.
When NFL training camps open this summer the Wildcats will have another eight players competing for jobs. Others include Danieal Manning (Houston Texans), Johnny Knox (Chicago Bears), Bernard Scott (Cincinnati Bengals), Clyde Gates (Miami Dolphins),  Trevis Turner (Pittsburgh Steelers) and Raymond Radway (Dallas Cowboys). Richardson, Whiteside, Gates and Scott are all related, with deep family connections in the north central Texas town of Vernon.
A ninth former ACU star, Tony Washington, will begin his second season with the Calgary Stampeders of the Canadian Football League.