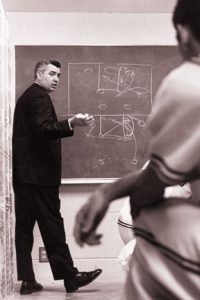 Dee Nutt (’50), a legendary figure in the history of men’s basketball at Abilene Christian University, died yesterday in Tyler, Texas at age 84.
A standout player for the Wildcats, he led his team in scoring three straight years (1947-48, 1948-49 and 1949-50), and to the Texas Conference championship each of the four years he played. He was named NAIA first team all-America in 1949-50.
He had the daunting task of following A.B. Morris’ 28-season run as Abilene Christian men’s basketball coach (1924-55), but Nutt was successful on the court and influential in the lives of his players.
Nutt took ACU’s men’s team to its first NCAA regional at the end of the 1958-59 season (with a 20-7 record), followed by five other regional tournament appearances and a trip to the national tournament in 1965-66. Wildcat teams he coached from 1955-69 and 1988-90 won four Texas Conference and three Southland Conference titles.
He coached Mexico’s national team in the 1971 Pan Am Games and the 1972 Olympics in Munich, Germany. Later, he was superintendent and coach at Abilene Christian High School and Westbury Christian School in Houston.
Nutt, who earned his M.Ed. degree in 1965, was inducted into the 1987-88 class of the ACU Sports Hall of Fame.
A funeral service is scheduled for Saturday, April 21 at Stewart Funeral Home in Tyler. Family visitation will begin at 10 a.m. and the service at 11 a.m. A memorial service for friends in Abilene will be at 3 p.m. Sunday, April 22 in Bennett Gym on the ACU campus.