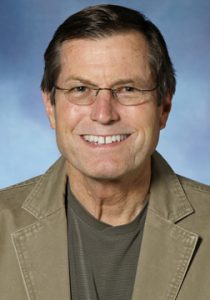 He has 38 to his credit, including 10 Boston Marathons. However, this third Monday in April – Patriot’s Day, when the 116th Boston Marathon will be run – he and his wife, Dr. Jennifer Dillman, are in Leipzig, Germany, where they are the resident directors of ACU’s Study Abroad program this semester.

A little before noon today, ACU’s Dr. Kevin Kehl and Dr. Libby McCurley will compete with 26,000 other runners in the famous Boston race.

When did you begin long-distance running and why?

I ran track (mostly what we called the three-mile run, now 5000 meters) and cross country for ACU in the late 1960s. At that time, doing mega mileage was seen as the best training approach and so many of our distance runners were easily getting in more than 100 miles per week (two workouts per day) in the off season and building up to the racing season. I remember running 120 or more miles per week. I wanted to run a marathon in college but never had the opportunity. After graduation, I ran my first marathon in 1971: the inaugural Dallas White Rock Marathon.

Did you run marathon-like distances to prepare for one?

I don’t have my running log with me here in Germany, but I think I ran a little over three hours at that time, and enjoyed the distance and the challenge. I had moved to Austin where the training was wonderful compared to Abilene, with hills and trails (even then) and trees and a river. Sometime after college, I started doing just one workout per day, so my mileage dropped to 50-70 miles per week. When I was building up to a marathon, the training runs  would be longer. I would usually build up to a few 20- to 22-mile runs. A couple times before a marathon, I would run 28 miles to prepare.

What was it like to run long distances in New England weather?

Before moving to New Hampshire in 1974, I ran another marathon or two and many shorter races. In New Hampshire, running was a delight and each season of the year brought its challenges. I remember a training run with a friend, Ken, on a 20-degrees-below-zero morning and in the spring, fighting the black flies. But most of the time, running in the snow was not a problem and in the fall, running among the colorful trees and over rolling terrain was sheer joy. Of course, I was pretty fit and running sometimes almost felt effortless. In the spring, running along a river listening to the ice begin to break up or in the summer, running through the forest were motivations enough to run. Sometimes I would run alone but mostly I would run with Ken, who remains a close friend more than 30 years later.

What appealed to you about the 26.2-mile distance of a marathon?

While the joy of running and the challenge of the marathon was motivation to run it, it was not my favorite racing distance. I think I enjoyed the 10k through 10-mile races more and felt I had better times over those distances. By the time I left New Hampshire in 1984, I had run maybe two Boston marathons as well as one in England and one or two New York City marathons and a couple in New Hampshire.

When I returned to Abilene in 1984, I determined I would continue to train for Boston, so between 1984 and 2002, I ran six to eight Bostons (a total of 10) as well as other marathons: Dallas, New York City, Austin, Fort Worth, and one in Abilene, for a total of 38. Returning to Boston was a good chance to see my friends, see a beautiful part of the country, and run in a historic race.

What did you eat and drink in the 24 hours before such a long race?

I did the carbohydrate depletion and reloading only twice and I was not convinced it made much or any difference to my performance. For my other marathons, I would eat normally during training and then have a big meal of pasta the night before the race, taking in a little more water than usual. During the race, I would alternate taking water and a Gatorade-type drink. Boston doesn’t start until noon, so I would eat a light breakfast of toast and tea and a banana.

The Boston Marathon ends – but doesn’t start – in Boston. A little before noon, most runners arrive at the high school in the town of Hopkinton, Mass., and head to the town square on Main Street.

Marathon runners have to be well-hydrated on race day, and that creates some logistical challenges you might not think about if you are not into long-distance running. While hundreds of portable toilets are provided, there are just not enough for the number of runners (27,000 last year) who don’t have time to stand in long lines when a 26-mile race is about to begin. So, on the way to the starting line in Boston, many of them – men and women – sometimes feel they have no choice but to relieve themselves in the available woods and even people’s yards, even though race officials and law enforcement personnel remind everyone that public urination is illegal. This bizarre scene is no match, however, for the start of the New York City Marathon (with more than 45,000 runners), which used to set up a 290-foot-long open trough at the foot of the Verrazano-Narrows Bridge, but has in recent years replaced it with more than 2,000 portable toilets.

Main Street is about the width of Campus Court here in Abilene, with runners lined up in roped-off corrals according to qualifying times. A few seconds before the starter’s gun goes off, the ropes are dropped and the runners move forward. If one is near the front, he or she can start running when the gun sounds. Those further back have to walk – maybe to the starting line or beyond – before they can begin running. Because each runner carries a timing tag (a chip utilizing RFID technology, or Radio Frequency Identification) on the back of their I.D. bib, their actual time does not begin until they cross the starting line.

I had to learn to take it easy at the start of the Boston Marathon, because the first mile is a slight downhill and it feels good to run after resting for the race. It’s a good feeling to get started, but for mere mortals who are not elite runners, one has to be careful to not get tangled with another runner. It is a lot of fun watching other runners, particularly those who are decked out in costumes.

The race proceeds through the communities of Ashland, Framingham, Natick, Wellesley, Newton Lower Falls, Brookline, and finishes in Boston, about five miles southwest of Logan International Airport, on Boylston Street.

Did you see famous competitors at the Boston Marathon?

At the start in 1987, I remember seeing Toshikiko Seko from Japan, the eventual winner, as we were both stretching and loosening up behind the old Congregational Church on the square. He also won in 1981. Another year, I saw Johnny Kelley, a two-time American Olympian and two-time winner (1935 and 1945) of the Boston Marathon who finished in the top five 15 times. He ran his 61st –  and last – Boston at age 84. One year I saw Dick and Rick Hoyt, a father (Dick) who pushes his son (Rick, who has cerebral palsy) in a wheelchair. They participated in their 29th Boston last year. Now, that is amazing!

Were large crowds a distraction or benefit, and why?

The spectators in Boston (and New York City) are tremendous, enthusiastic and helpful. If you are struggling near the end of the race, many people encourage you to keep running. The crowds (up to 500,000 in Boston) help pass the time with their signs or songs or by calling out your name or city, which might be visible on your shirt. There is great diversity among the crowds in Boston and New York City. I have the sense that people in those cities see their marathons as part of their identity.

I always enjoyed passing Wellsley College in Boston, where the screams of the mostly women students are almost deafening.

Another favorite part of the course for me was passing Fenway Park, where the Red Sox play each Patriot’s Day, as well. It also is about three miles from the finish. Overall, Boston loses elevation from start to finish but there are hills in between, most famously a series of hills culminating in Heartbreak Hill at about mile 21.

I have always considered Boston to be a difficult course compared to more flat terrain in Dallas and elsewhere. My fastest time – 2:47 – came in Dallas. I’ve run Boston when it was snowing at the start, when it rained, and when it was hot. I’ve had some good races and some disappointing ones in Boston, but I was always glad I went.

What did you think about to keep your mind busy while running for several hours straight?

Having something to think about during the race is not a problem. Besides the crowds and the other runners, my main focus was on maintaining a predetermined pace. And if one feels good, the time seems to go by quickly. But on bad days in the marathon, each mile feels like an eternity. In those times, determination and pride (and maybe the price of the plane ticket) keep you putting one step in front of the other. The best race times and most enjoyable races at Boston were running with my New Hampshire friend, Ken, throughout the race. We could point out antics of the spectators to each other and just get into the rhythm we wanted.

The bigger issue for keeping the mind busy is during long training runs on days when you are tired and by yourself and wondering why you are doing this. On those days, I’ve thought about what I wanted to say in my dissertation or later, something I was writing or just about life in general. When running with good friends, it’s relatively easy to keep the mind off the discomfort, and I’ve had great discussions about politics, religion and philosophy on easy five-mile runs and longer 20-mile runs. They can be wonderful times to think or to have the listening ear of someone who more or less has no choice but to listen.

What kind of running do you do now?

These days I am only running about five miles three or four days per week, mainly just to keep some level of fitness. Rather than the treadmill or elliptical machine, I enjoy getting out on the roads – or if in Austin or Dallas, a trail – which still gives me a sense of freedom and accomplishment, though I am now running at a snail’s pace.