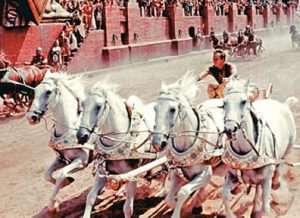 Watching movies in Abilene’s historic Paramount Theatre is a memorable experience, which many will be reminded of again this weekend when Ben-Hur plays in the 2012 Paramount Theatre film series.
But it will have a hard time coming close to one of its showings – albeit a partial one – in 1989.
In October of that year, Charlton Heston and his wife, Lydia Clarke Heston, were on the Abilene Christian University campus to participate in Homecoming activities, including one of the most unique events ever hosted in the now 112-year-old Paramount.
Charlton and Lydia, an accomplished photographer, co-presented “Growing Up With the Epic Film: A Family Adventure” as the final event of a busy Homecoming Saturday. Hundreds of people paid $10 each to attend at a late hour – 10:45 p.m. – for a fascinating look inside the Hestons’ life. After a brief opening act, the show began at 11 p.m.
Oct. 21 was one of the longest days in ACU Homecoming event history, with the Hestons at the center of much of it. They spoke briefly at Chapel at 9:30 a.m. in Moody Coliseum, then participated in the ribbon-cutting and dedication of the James and Betty Muns Center for Marriage and Family Studies in the then-new Onstead-Packer Biblical Studies Building. Afterward, Lydia signed copies of her new book, The Light of the World, published by ACU Press. At 6 p.m, the Hestons were special guests at a fundraising dinner for the Department of Theatre and then attended “The King and I” musical in the Abilene Civic Center at 8 p.m., with the couple going backstage to greet members of the cast and crew.


“Growing Up With the Epic Film” was a tour of Charlton’s Hollywood film résumé, through his wife’s Leica camera lens.
Lydia first began shooting photographs backstage and on the set of The Greatest Show on Earth, the first of two films on which Charlton worked with legendary director/producer Cecil B. DeMille. The Ten Commandments was the second, now a staple of Easter-season movie experiences. Heston won the Academy Award for Best Actor in Ben-Hur, one of the record 11 Oscars the epic film received.
Seated with her husband behind a small table on the Paramount stage, Lydia narrated a slide show of 160 memorable photographs of their family, including an image of their son, Fraser, lying in a basket floating in water on a movie set. Few knew he played the baby Moses in The Ten Commandments.
Then it was Charlton’s turn.
He told stories about the preparations for Ben-Hur, a film that redefined the word epic in its complexity and cost, and required 50,000 extras for the chariot scene alone. His descriptions about details in the chariot race were fascinating, and then the crowd was treated to a 10-minute clip of it from the movie.
The crowd sang “The Lord Bless You and Keep You” to the Hestons before the final curtain closed on a remarkable, once-in-a-lifetime experience.
The couple established the Heston Family ACU Theatre Endowment and the Lydia Clarke Heston Photojournalism Scholarship at Abilene Christian, and made several trips to campus to attend university events and visit longtime friends Dr. William J. Teague (’52) and his wife, Margaret (Newlen ’56) “Peggy” Teague.
Charlton died in 2008; he and Lydia were married 64 years.
Ben-Hur has played in the Paramount Theatre four times since 1989. You can catch it again at 7:30 p.m. tonight and at 2 p.m. and 7:30 p.m. on Saturday in its remastered Blu-ray form. For tickets, call 325-676-9620 or purchase them online.
[youtube 4hrbRDAOF4k]
PREVIOUS POST   NEXT POST
SHARE: