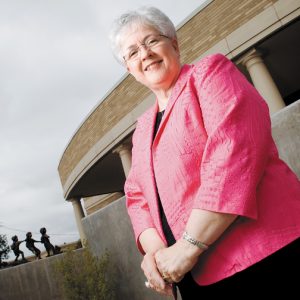 Abilene Christian University trustee and longtime former professor and administrator Dr. Rose Colleen (Stockburger ’77 M.Ed.) Durrington, 75, died Monday in Abilene, Texas. Her health failed in recent months from a sudden illness experienced following an overseas trip in June 2011.
Born March 23, 1937, in Fayetteville, Ark., she graduated from McMurry University with a B.S.Ed. degree in 1972, earned M.Ed. degrees from ACU in 1977 and 1981, and graduated from Texas Tech University in 1984 with an Ed.D. degree. She was the first woman to be appointed an academic dean at ACU.
Her 22-year academic career at ACU began in 1985 as director of reading programs and assistant professor of education. She went on to serve as coordinator of elementary and secondary certification programs, dean of the College of Professional Studies, director of University Seminar, chair of the Department of Education and the Division of Education, associate dean of the College of Arts and Sciences, and dean of the College of Arts and Sciences. She retired in 2007 as professor emerita of education.
“She served with distinction in several respects throughout her career at ACU,” said Dr. Royce Money (’64), chancellor. “First and foremost, she was a professor – a teacher of teachers. She also was a department chair, a dean and after retirement, a trustee of the university. Quite an unparalleled career. In each of these roles, Colleen was the epitome of competence, fair-minded, thoroughly prepared for every occasion, and always pleasant, whether she agreed with you or not. That blend of friendliness, conviction and professionalism is uncommon, and she will be missed.”
Durrington will be remembered by many as one of the most beloved deans in ACU history.
“She was a giant as leaders go. She was the kind of leader who called others into leadership,” said Dr. Malesa Breeding (’80), executive director of the Adams Center for Teaching and Learning, and former dean of the College of Education and Human Services. “Most of the people currently serving in deans’ roles at ACU were mentored at one time or another by Colleen. She was fair, honest, insightful, visionary and faithful. She was faithful to those of us who worked for her and with her, and faithful to the cause of Christian higher education.”
“She was, for me personally, a true mentor,” said Dr. Dana Kennamer Pemberton (’81), professor and chair of teacher education. “Colleen had a way of leading with grace that is rare. Her commitment to the mission of ACU was never in doubt. Everything she did as faculty, a chair or as a dean was because she believed in the power of Christian higher education. It is hard to believe that she is no longer a phone call away. She will be terribly missed.”
Durrington’s reputation as an expert educator was first formed as a public school teacher and consultant, and as principal of two Abilene schools (Valley View Elementary and Bonham Elementary) who had a heart for reading teachers and their work. She served on several statewide education commissions, including the Texas Commission on Standards for the Teaching Profession, the Texas Board of Educators, and the Texas Association of School Boards. She was a trustee of the Abilene Independent School District from 1990-96, and made presentations at reading conferences across the nation. Durrington authored numerous professional papers as well as a book, Perceptions of the Effectiveness of Women in Public School Administration.
She served on a state panel to select full-time Texas teachers to receive Christa McAuliffe Fellowship Awards, in honor of the New Hampshire schoolteacher who died in the 1986 Space Shuttle Challenger explosion.
At the time of her death, she was serving on the Board of Directors for the 12th Armored Division Memorial Museum, the Central Appraisal District of Taylor County, and the Christian Service Center.
Family visitation is April 13 from 6-8 p.m. at Piersall-Benton Funeral Home (733 Butternut St., Abilene, TX 79602). A memorial service will be held April 14 at 1 p.m. at Abilene’s Southern Hills Church of Christ.