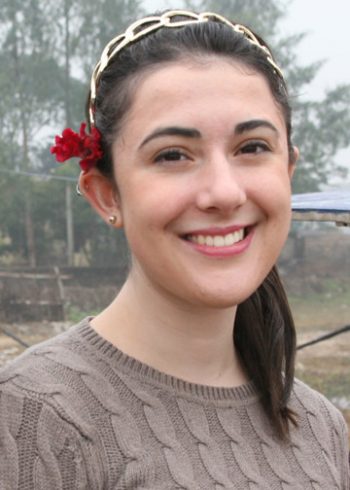 At 17, Brittany Partridge went on a mission trip to Romania where she met other girls her age. These girls, however, lived a life far different than her own. They were among the millions of young people around the world being bought and sold like objects, sometimes for child labor, more often for sex.
The girls Partridge met were the lucky ones; they had been rescued into a safe house. Partridge felt an immediate connection with these teens who had been forced into prostitution. “I couldn’t help but think that could have been me,” she said.
From her first encounter with modern-day slavery, a passion was ignited. Partridge decided her purpose in life was to combat human trafficking, to champion people who were being exploited around the world.
“I was just shocked that nobody knew about the issue,” Partridge said. “People weren’t talking about it; they never brought it up at school. We talk about slavery from 200 years ago but not about today.”
As a freshman at Abilene Christian University, Partridge co-founded the Red Thread Movement, an organization dedicated to combating human trafficking in Nepal.
Last week, the political science major from Annandale, Minn. – now a senior – was named a Truman Scholar for 2012. She is the first ACU student to win the elite honor and accompanying $30,000 scholarship.
Though not planned, word of Partridge’s award coincided with Justice Week on the Abilene Christian campus. The Red Thread Movement was among several social justice programs and speakers featured throughout the week.
ACU president Dr. Phil Schubert recognized Partridge’s Truman Award in Chapel on Monday, calling her “a tremendous example of truly living out the ACU mission of Christian service and leadership throughout the world.”
She also was recognized at a reception Monday hosted by the Honors College.
The highly competitive Truman Scholarship, presented by the Harry S. Truman Foundation, is awarded to college students who plan to attend graduate school in preparation for a career in government or other public service. As a Truman Scholar, Partridge joins a list of distinguished students from schools such as Princeton, Stanford, Georgetown, Cornell, Duke, Dartmouth and Yale.
After her first encounter in Romania with sex trade victims, Partridge decided she would become a public interest lawyer so she could prosecute the traffickers, she said.
“I didn’t really think I would be able to do that until after I got out of ACU and went to law school. I had this vision that my goals would have to wait until I had more education,” she said. “But something I learned at ACU is you can use your education while you are getting it.”
Partridge and her freshman roommate, Samantha Sutherland, began volunteering at local nonprofit Eternal Threads, which helps teach women in developing countries income-producing skills.
“We found out Eternal Threads was working in Nepal with girls who had been rescued out of human trafficking,” Partridge said. “And that just sparked my imagination. And I thought, what if we were to sell bracelets that those girls could make? They could be employed, and we could raise awareness for human trafficking. And so that’s what we did.” 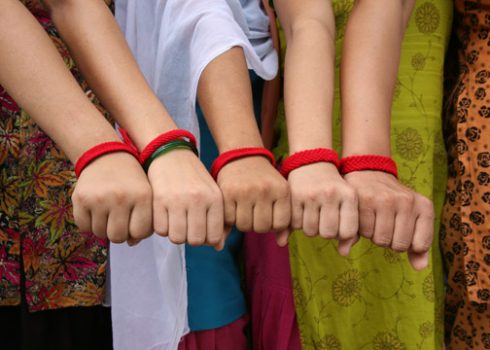 Each bracelet is handmade by women and girls at-risk for trafficking in the Asian nation, bordered to the north by China and to the south, east and west by India. Sale of the $3 bracelets helps victims by raising awareness, providing employment for those affected and funding safe houses that help establish border security.
What started as a spark on the ACU campus has spread like wildfire across the United States. The Red Thread Movement now works with more than 180 musicians, students on 75 university campuses, and high school and youth groups.
As ACU’s first Truman Scholar, Partridge is a giant step closer to realizing her dream to eliminate human trafficking. She intends to use the scholarship to earn a law degree from Georgetown University and pursue a career with the U.S. Department of Justice or the U.S. Department of State.
“These positions will enable me to use the law and diplomacy to defend human rights,” Partridge said.
Since starting the Red Thread Movement, Partridge has worked with anti-trafficking organizations around the world, appeared on CNN International for CNN’s Freedom Project, and was a fellow at Polaris Project in 2011. In March 2012, she spoke at a workshop on human trafficking on the Princeton University campus.
Watch a short video of Dr. Phil Schubert surprising Partridge during class with news of her award: