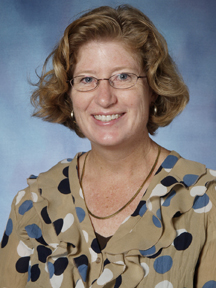 Sue Ann (Chance) Gibson, 49, former longtime administrative coordinator in Abilene Christian University’s Center for International Education (CIE), died March 30 in Abilene after a battle with cancer.
Born May 25, 1962, in Tulia, Texas, she attended school in Brownfield and graduated from Shamrock High School and attended West Texas A&M University before marrying Russell Gibson in 1981. Gibson taught young children’s Bible school classes at church and at mother’s-day-out programs. She served in Abilene Christian’s CIE from January 2001 to September 2011, where she helped international students enroll at ACU.
“Sue Ann revealed the face and love of Christ to hundreds of international students through her kind words and gentle spirit,” said Dr. Kevin Kehl, CIE executive director. “She had a thorough understanding of immigration regulations and a determination to graciously and lovingly help students follow them. Her words and actions spoke peace into the lives of so many trying to find their way in a new place. She also led students and co-workers by acting and thinking about them more highly than she did herself. She always focused first on the ‘others’ in her life – family, students and teammates.”
Among survivors are her husband, Russell; two daughters, Brittany (Gibson) Thompson and Chelsea (Gibson) Hall; four grandchildren; four brothers, Mike Chance, John Chance, Jim Chance and Bob Chance; a sister, Pam Morgan; and her parents, Bill and Pat Chance.
A memorial service will be held April 3 at 11 a.m. at Baker Heights Church of Christ in Abilene.