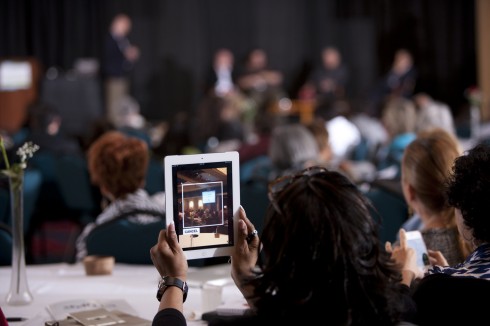 Much like Abilene Christian University, McAllen Independent School District takes seriously its efforts to integrate mobile learning into the classroom. In fact, it may be the largest district in the United States working to place mobile technology into the hands of all its students – from kindergartners to high school seniors – more than 25,000 in all.
The South Texas school district partnered with ACU Connected on March 20 to present the Transforming Learning Conference at the McAllen Convention Center.
About 330 education and business leaders from across the state and as far away as California gathered in McAllen to attend sessions, tour campuses and explore the future of digital learning in K-12 settings. More than 30 school districts serving 350,000 students were represented.


“What was most invigorating about the conference was seeing the deep investment not just
by McAllen ISD’s teachers and administration, but also the strong commitment of the parents and community leaders,” said Dr. William Rankin, ACU’s director of educational innovation.
“For example, all the school board members but one (who was away on business) attended the conference, as did a number of parents. That’s incredibly rare,” Rankin said. “And when I visited two schools the day after the conference, I witnessed one of the most impressive examples of student engagement I’ve ever seen.”
“It was a pep rally for 21st-century learning that equips local teachers and administrators to make real change in the lives of students in an area of the world that is often overlooked and marginalized,” said George Saltsman, ACU’s executive director of innovation in learning and educational technology. “I have no doubt it will make a lasting impression for participants and students in their schools, as well.“
Joining Rankin as presenters in McAllen were Marco Torres, California Teacher of the Year; John Couch, Apple’s vice president of education; and Dr. James Ponce, MISD superintendent.
The most popular breakout sessions were presented by Alline Sada from A Colegio Euroamericano de Monterrey and Dr. Robbie Melton, associate vice chancellor for academic affairs and eLearning for the Tennessee Board of Regents. Saltsman said Melton’s workshops on apps for the classroom spilled out into the hallway, where a group of 20 of so participants kept asking questions and watching demos for another hour after the session ended. At the request of a number of teachers, she did an additional training session at the hotel the next morning before her flight back to Tennessee.
Ponce said the MISD initiative is about much more than the mobile devices. ACU helped the McAllen school district develop its plan to purchase nearly 27,000 iPads and iPod touches for every student and teacher.
“It’s an expansion on the perspective of the teachers who are part of the dialogue from the beginning,” he said. “A year ago, we put together a committee called Cadre One that included representation from all sectors of our school community. It was the conversations that began there that become the root of TLC3,” the school district’s initiative to become a leader in instructional technology.
“As educators, we stand at the cusp of an extraordinary time … a day when we are seeing phenomenal, cutting-edge opportunities to propel students to greater achievement,” Ponce said.
Abilene Christian has helped a number of K-12 school districts discover how digital material and devices can revolutionize their learning environment.
Each summer, ACU’s K-12 Digital Learning Institute brings together teachers from across Texas to learn how to use digital devices to enhance their lessons.
In September 2011, ACU Department of Teacher Education was featured in a series of videos sponsored by the Texas Education Agency. The documentaries profile the groundbreaking work being done to prepare future educators to integrate technology in their classrooms.
The teacher education department continues to partner with Abilene’s K-12 schools, sending future teachers into the classrooms each semester to facilitate technology integration projects, as well as advising school districts throughout the state.
“That’s what has been so rewarding about the work several of us have been doing as part of ACU’s Connected initiative and part of the reason I’m already looking forward to our next Connected Open House at the beginning of April,” said Rankin. “We’re getting the opportunity to help discover and support new forms of learning throughout the educational community.
“And we’re not only helping partners such as McAllen ISD; they’re helping us,” Rankin said.