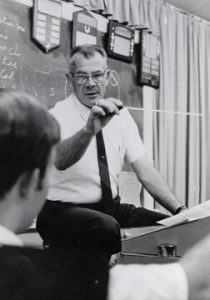 Dr. Douglas “Fessor” Fry Sr., 95, one of Abilene Christian University’s most beloved band directors, died March 16 in Abilene. A private burial will be held for Fry in Tyler, and a public memorial service will be held later in Abilene.
Born July 15, 1916, in Spicewood, Fry (’40) graduated from Levelland High School in 1934, enrolled in ACU to pursue a B.S. degree in secondary education, and played trombone in the collegiate band directed by D.W. Crain. He earned a M.M.E. degree and, later, an honorary Doctor of Music degree from Southern College of Fine Arts. He was ACU associate professor emeritus of music and director emeritus of bands, and was inducted into the Phi Beta Mu Texas Bandmaster’s Hall of Fame in 1992.
Fry directed award-winning high school bands in Conroe, Brady and Robert Lee, and the Wrangler Band at Cisco College. His talent served him well in World War II, when he was a band officer in the South Pacific for Adm. William F. Halsey Jr. – who commanded the United States’ Third Fleet – and directed war-time USO shows in the Pacific by entertainers such as Bob Hope and Jack Benny. Fry retired from the Navy and Naval Reserve following 22 years of service.
During his 16-year career as ACU’s director of bands (1953-69), Fry traveled with the Big Purple and Concert Bands on cross-country tours, and recorded several albums. He also conducted Abilene Christian’s symphony orchestra.
Fry was involved in what former ACU historian Dr. John C. Stevens (’38) called “the most spectacular band concert” in the university’s history the evening of May 21, 1954, the final performance of Fry’s first year as conductor.
According to Stevens’ No Ordinary University, the Wildcat Band – not yet called the Big Purple at that point – performed its Spring Concert in Sewell Auditorium, featuring a rendition of Tchaikovsky’s “1812 Overture.” Fry arranged for his two cousins, Neil (’50) and David (’51) Fry, and fellow local members of the National Guard to set up a 105-millimeter howitzer gun outside the rear of the auditorium. The 151st Field Artillery of the Guard’s 36th Division did their job, and although the gun was firing blanks at key moments of the piece of music, the explosions shattered windows in Sewell and two nearby residence halls, started small grass fires and made some in the quiet college neighborhood think war had broken out.
Among survivors are his wife, Mary Frances; a son, Doug Fry Jr.; a daughter, Nancy (Fry ’68) Hammes; a sister, Jence Morgan; and a one granddaughter.
Memorial gifts can be sent to the Fry-Crain Music Scholarship at ACU.