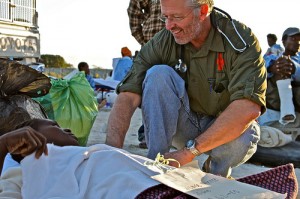 While traditional Spring Break Campaign groups from Abilene Christian University are focusing this year on domestic missions opportunities, one group of 14 students decided to use this week to get another up-close look at the medical missions work of the Mobile Medical Disaster Relief (MMDR) team near Port-au-Prince, Haiti.
While not an official ACU Spring Break campaign, they are part of a 47-person team volunteering to help at Haiti orphanages, plus the clinics operated by the Vanderpool family of Brentwood, Tenn. David M. Vanderpool Jr. (’82), M.D.; his wife, Laurie (Stallings ’81) Vanderpool; and their son, David S. Vanderpool (’10), are on this trip as well. (Vanderpool Jr., pictured here, is a surgeon.)
The Vanderpool family was featured in People magazine’s annual “Heroes Among Us” issue in 2010 for having been actively involved in helping Haiti recover from a series of natural disasters. Notably, the impoverished nation suffered a 7.0-magniture earthquake in January 2010 that leveled much of the capital city’s infrastructure, killed 316,000, injured 300,000 and rendered 1 million people homeless. The next few weeks brought a second earthquake (6.0-magnitude) and dozens of 5.0-magnitude or greater aftershocks, followed by a cholera epidemic in October, and in November, Hurricane Tomas.
The ACU team arrived Sunday to attend church with those who live and work at the Children of Hope Orphanage and Hospice (CHOH) in Thomazeau, Haiti. Then they began packaging 12 tons of donated food.
Kristy Collins, communications and network director for MHMR, writes:

“Each ‘hunger pack’ will have about 16 cups of rice, a package of pasta and a can of mackerel in tomatos. These will be distributed to the worst cases of starvation seen at the clinics.
There will be four full-day clinics (Monday-Thursday) in and around the village of Thomazeau. Some of the ACU students will be conducting a starvation assessment on patients at the clinics. They will interview patients, with the help of a translator, weighing and measuring them.
These patients will be re-evaluated to see if the hunger packs help improve their situation, and followed long term. The villages in which we conduct clinics are close to the new Live Beyond base that is currently being built. In addition to a hospital, orphanage, secondary school, trade school and worship center, we will have demonstration gardens and tilapia ponds, to teach effective gardening techniques and fisheries in Haiti, to improve the health and quality of life for the people. The survey the students will begin is planned as a long-term study of the area.
Aside from the clinics and the starvation assessments, some of our team will be building a wall around the first building phase of the Live Beyond Base. Another faction will be doing educational assessment on the orphans at CHOH. This is just to see where they are in their primary school. These children will attend secondary school on the Live Beyond base, and hopefully these assessments will help in their placement and in developing the curriculum.”