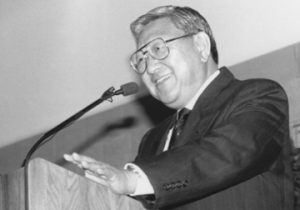 Dr. Thomas Kim, former visiting professor of economics and economist-in-residence at Abilene Christian University, died yesterday in Abilene at age 83.
He was the longest-tenured university president of the past 40 years in Abilene, having served McMurry in that role from 1970-93. Under his leadership, McMurry moved from college to university status in 1990.
A popular adjunct lecturer in ACU’s College of Business Administration in the late 1990s, Kim says he quickly felt at home among students and colleagues on the campus across town from McMurry, and especially relished hearing a cappella singing in Chapel. “They show me what I have come to call ‘the Christian love,’ ” he told The Optimist in a 1995 profile.
Kim earned a B.A. degree and an honorary doctorate from Berea (Ky.) College, an M.B.A. from Indiana University and a doctorate from Tulane University. He was named 1986 Outstanding Citizen of the Year by the Abilene Chamber of Commerce, and helped found the Independent Colleges and Universities of Texas. Kim taught economics at Berea, Tulane, the University of Akron, and Texas Tech University. He was a frequent featured speaker at the Economic Outlook Conferences sponsored in part by ACU’s College of Business Administration.
He served as a member of the National Commission for the Study of Higher Education. Kim was elected by the United Methodist Church to serve on its University Senate – the oldest accrediting agency of educational institutions in the United States – where he was responsible for the accreditation process of all U.S. colleges, universities and seminaries associated with the UMC.
Kim was born to Korean parents in 1929 in Shanghai, China, who spent much of his early life fleeing the colonial Japanese army. After World War II, he worked as a translator for the U.S. military in South Korea.
Services for Kim have been set for 2 pm. Saturday at Abilene’s St. Paul United Methodist Church.