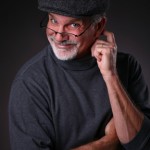 Curt Cloninger, a 1976 Abilene Christian University theatre graduate, has performed one-man shows about faith before crowds as large as 30,000, but no group has been as prominent as the one gathered recently for the National Prayer Breakast series of events Feb. 1-2 in Washington, D.C.
Although the overall event is a gathering chiefly covered by C-SPAN and other major media on Thursday morning, it also includes a Wednesday night banquet, and breakfast, luncheon and dinner meetings the next day. Hosted by the House and Senate Prayer Groups the first week of February each year, each meal event draws up to 3,500 people from more than 100 nations to the Washington Hilton.
Cloninger presented his “Jesus Talks!” show – a 25-minute monologue about the parables and the Last Supper – for the Thursday lunch crowd of political, church, civic and business leaders from around the world. An artist-in-residence at Perimeter Church in Atlanta, Ga., he is an actor and writer whose comic and dramatic presentations are designed to help people better understand God.
He is the second ACU graduate to be featured at the National Prayer Breakfast. Minister and best-selling Christian author Max Lucado, an 1977 ACU graduate, was a keynote speaker at the Thursday breakfast in 1999. This year, best-selling author Eric Metaxas and President Barack Obama were keynote speakers at the Thursday breakfast, and Heisman Trophy-winning quarterback Robert Griffin III of Baylor University led the closing prayer.
Cloninger has performed his shows for nearly 30 years, most at conferences and workshops for ministry professionals.
“At those events, you pretty much know you are going to encounter evangelicals, who, for the most part, share your perspectives,” he said. “At the Prayer Breakfast, there was a whole other feel. There were lots of evangelicals there, but there also were Muslims and Jews and probably a scattering of Buddhists and Hindus as well.”
He said the organizers make no apologies: they are straightforward about the event centering on Jesus. Evangelicals from around the United States were in attendance, but the audience was decidedly international in flavor.
“I met a group of Muslims from Jordan who were fascinated by my show,” Cloninger said. “I met folks from the Christian Embassy in Jerusalem. I met Australians who are working with Asian immigrants there. I met an English woman who lives in France and hangs out with local street kids who are desperate for someone to pay attention to them.”
The National Prayer Breakfast began in 1953 in Washington, D.C., at the suggestion of newly elected President Dwight D. Eisenhower, who said the White House was “the loneliest house I’ve ever been in.”  Time magazine’s coverage of the first event included this account of it:

“In an assembly room of Washington’s Mayflower Hotel one morning last week gathered a group of 600. The President of the United States was there. So were the Vice President, the Chief Justice of the United States, Cabinet members, Congressmen, diplomats, businessmen. Senator Frank Carlson of Kansas, called order. “This morning,” said Baptist Carlson, “we are here to renew our faith and our commitment to God.” In the next half-hour, half a dozen notables rose to their feet. Wisconsin Senator Alexander Wiley, a Lutheran, read from the First Psalm (“Blessed is the man that walketh not in the counsel of the ungodly.“). Vice President [Richard] Nixon, a Quaker, read from the 15th chapter of John (“This is my commandment, That ye love one another, as I have loved you.“). Hotelman Conrad Hilton, their host, a Roman Catholic, told them: “It took a war and the frightening evil of Communism to show the world that this whole business of prayer is not a sissy, a counterfeit thing. Rather it is a part of man’s personality, without which he limps.”