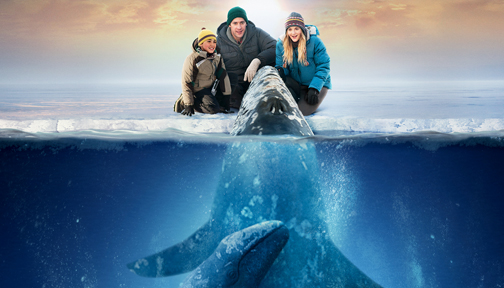 Nelson Coates (’84) has no shortage of environmental and physical challenges in his work as a Hollywood production designer, but his latest project, “Big Miracle,” provided some not previously encountered for a feature-length film.
Shot entirely in Alaska, the new film from Universal Pictures – starring Drew Barrymore, John Krasinski and three migratory sea mammals the size of buses – tells the true story of attempts in 1988 to rescue three gray whales trapped under ice near Point Barrow. Inuit hunter Roy Ahmaogak discovered them, and his heroic individual efforts eventually were joined by an international community of scientists, governments and private industry.
Former longtime ACU writer Garner Roberts (’72) writes an interesting profile of the project in today’s issue of the Abilene Reporter-News.
Coates had to recreate scenes from an even more remote part of Alaska in a storage yard behind a train depot in Anchorage. The movie set included 22-foot-deep water tanks to hold the animatronic whales used in the movie, and weather conditions that made working outdoors treacherous.