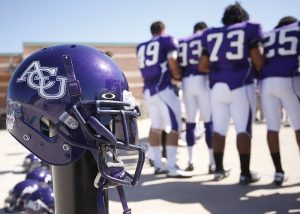 Over the past few years, the ever-changing landscape of intercollegiate athletics has reshaped traditional rivalries from the biggest to the smallest conferences and leagues in the nation.
Like many institutions in NCAA Division I, II, III and the NAIA, Abilene Christian University also has taken the opportunity to study its athletics programs. For the past 18 months, an assessment process has been underway to help determine what might be best for the Wildcats’ future. ACU is a current member of and an annual powerhouse in NCAA Division II and the Lone Star Conference (LSC) – the latter an affiliation unchanged for 38 years.
The LSC has experienced its share of instability in recent years. In 2011, five universities from Oklahoma left to join other Division II conferences, which forced the remaining LSC institutions to scramble to replace games and matches on its schedules for this school year.
Locally, McMurry University (1,472 students) is moving in Fall 2012 from non-scholarship NCAA Division III to Division II, where scholarships can be awarded. Hardin-Simmons University (2,435 students), which remains a member of the Division III American Southwest Conference, is standing pat. In San Angelo, LSC member and longtime ACU rival Angelo State University (7,084 students) recently announced it had finished a similar assessment and chosen to remain in the LSC and Division II because of funding issues and its own concerns about being competitive in Division I.
With an enrollment of about 4,600, ACU is the smallest institution in the LSC, yet most of its teams have been dominant in the sports in which they compete. Abilene Christian is the only university in NCAA Division II to be ranked in the top 15 in each of the 16 Learfield Directors’ Cup final standings, which annually recognize the best overall sports programs in the nation.
Although one of the only constants in athletics affiliations seems to be change itself, the Wildcats have been, historically, one of the more stay-put members in the Texas intercollegiate sports landscape. That strategy has paid off, making ACU a place “Where Champions Are Made,” which it like to say and has numbers to back it up. In the NCAA, only UCLA, Stanford, USC and swimming powerhouse Kenyon College have won more national team championships than ACU. Overall, the Wildcats have won 64 national team titles, 160 LSC team titles, and their student-athletes have received twice as many prestigious NCAA Post-Graduate scholarships as ACU’s closest LSC competitor, and more than all but a handful of the largest Division I universities in Texas.
Abilene Christian has fielded intercollegiate sports teams for 92 years. It was part of the Texas Conference from 1919-62 and a founding member of the Southland Conference (SLC) in 1963. It was a member of the SLC for 10 years, leaving for LSC and NAIA status prior to the 1973-74 academic year. ACU was a College Division member for most of its history before joining the NAIA in 1973 and NCAA Division II in 1981.
Founding members of the Southland in 1972 were ACU, Arkansas State University, Lamar University, The University of Texas-Arlington, and Trinity University. This fall, only one of those, Lamar, will remain in the conference. Most of the 11 football-playing SLC institutions have enrollments much larger than ACU. Two of them – Stephen F. Austin State University and Sam Houston State University – are former LSC members.
In football, the Southland competes at NCAA Division I FCS (Football Championship Subdivision) level, as do universities in the Ivy League such as Harvard, Yale and Princeton. Examples of other FCS members are North Dakota State University (Missouri Valley Conference), Villanova University (Colonial Athletic Association), Stony Brook University (Big South Conference), Grambling State University (Southwestern Athletic Conference) and Bucknell University (Patriot League).
ACU president Dr. Phil Schubert (’91) provided an update today in an email message to faculty and staff:

“… as part of our ongoing assessment of what might be best for the future of ACU athletics, I was invited to visit Thursday with officials from the Southland Conference (SLC). I was joined by Jared Mosley, athletics director, and Phil Boone, vice president for advancement, in sharing information about ACU with presidents of universities represented by the SLC, which is a conference affiliated with NCAA Division I. This discussion was the next step in ACU’s evaluation process and did not constitute an invitation for Abilene Christian to join the SLC. And even if it had, we are not ready to make a decision on this issue. We had an excellent discussion and gained valuable insight to help with our ongoing assessment. I will continue to keep you informed as we move forward in this process.”

The SLC is losing Texas State, Texas-San Antonio and Texas-Arlington to other conferences, and has recently decided to add Houston Baptist and Oral Roberts universities. Any decision ACU might make to move to Division I is dependent upon a Division I conference inviting it to be a member, and the SLC is the one option that makes the most sense because of travel issues (its members next fall will be in Arkansas, Texas, Louisiana and Oklahoma). But the SLC has to first decide if it wants ACU, and Abilene Christian must determine what change, if any, is in its best interest.
One of ACU’s primary considerations is financial, chiefly because of the cost of additional scholarships required to compete in Division I. Schubert has told faculty and staff that additional funding for such a change in athletics affiliation will have to come from fans and/or friends outside the university, rather than be absorbed by ACU’s annual operating budget. ACU facilities are sufficient for SLC competition, although the university makes no secret of its longtime wish for an on-campus football stadium rather than Shotwell Stadium, which is owned by the Abilene Independent School District.
Impatient Wildcat fans who want to see their teams competing at the next NCAA level only want to know when the move will take place. However, the best answer is: “Wait and see.” Schubert and other university leaders, and the Board of Trustees, are still evaluating ACU’s options and committed to due diligence.
A story in Friday’s Abilene Reporter-News provided a good look at the issues. Watch this blog and acusports.com for upcoming news as well.