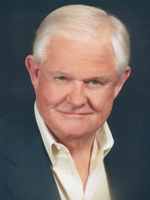 Samuel Robert Sparks, 83, a longtime trustee of Abilene Christian University, died Dec. 28 in Harlingen, Texas. Born Christmas Eve in 1928, the Haleyville, Ala., native was a successful businessman and community leader in South Texas who was known for his generosity and leadership. A memorial service will be held at 2 p.m. Dec. 31 at the 8th and Harrison Church of Christ in Harlingen, near his hometown of Santa Rosa.
He was chairman of the B&P Bridge Company which was given a permit in 1928 to operate a bridge in Progreso, Texas, spanning the Rio Grande River and the border between the United States and Mexico. Sparks was president and CEO of the Progreso International Bridge, one of the busiest border crossings in Texas.
He was president of the Santa Rosa Kiwanis Club and Rio Farms Inc. (an agricultural research facility); chairman of the Harlingen Area Chamber of Commerce; former chair of the Advisory Committee to the Texas A&M University System’s “Target 2002” project and Rio Farms of Monte Alto; and director of the San Antonio branch of the Federal Reserve Bank of Dallas, First National Bank of Harlingen, and the Valley Farm Bureau.
Sparks was a member of ACU’s Board of Trustees from 1970-99 and its Senior Board from 1999-2006. He also served on boards of the Salvation Army, Valley Baptist Medical Center, Golden Palms Retirement and Health Center, Sunny Glen Children’s Home, Rio Grande Valley Sugar Growers Inc., Texas Vegetable Seed Improvement Association, Valley Acres Irrigation District, South Texas ISD, and Santa Rosa ISD.
In 1965, he was runner-up for the Outstanding Young Farmer of Texas award. A strong advocate of the Boy Scouts of America, he was presented with its Silver Beaver Award in 2000.
Survivors include a sister, Ella Katherine May; Seanne, his wife of 63 years; two daughters, Elizabeth (Sparks ’72) Johnson and Karen (Sparks ’74) Guenther; two sons, Bobby Sparks (’76) and John Sparks; nine grandchildren; and 15 great-grandchildren.