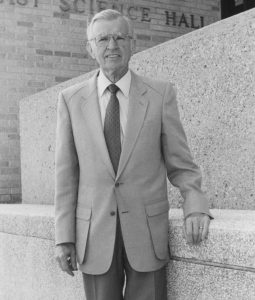 Ninety-one-year-old Dr. John Keith Justice, who was professor of agronomy at Abilene Christian University for 35 years, died Christmas day in Abilene. A memorial service will be held Dec. 29 at 3 p.m. at Graham Street Church of Christ.
Justice was born Aug. 26, 1920, in Martinsville and reared on his family’s small farm in Nacogdoches County of East Texas. He earned a bachelor’s degree in economics from Stephen F. Austin State University in 1942, two degrees from Texas A&M University (bachelor’s in agricultural education in 1948 and master’s in agronomy in 1949), and a Ph.D. in soil science from Utah State University in 1961.
He was principal of Black Jack School in Attoyac, Texas, from 1942-43 and married Vera Brough in 1943, before serving three years (1943-46) in the Navy during World War II. He taught one year at Texas A&M before joining the ACU faculty in 1950.
Justice was renowned for his academic expertise in agronomy, having served as president, vice president and director of the National Association of Colleges and Teachers of Agriculture, which presented him with a Distinguished Educators Award. In 1961, he became ACU’s first recipient of a Piper Professor award from the Minnie Stevens Piper Foundation, the same year he received the Trustees Award as Abilene Christian’s top professor. He served as chair of the Department of Agricultural and Environmental Sciences from 1961-80.
He and Vera planned to be vocational missionaries in their retirement years. Justice was never far away from ministry work, having served as a part-time preacher for rural congregations such as Midway, Navasota, Putnam, Herndon Chapel and Hawley. While in graduate school, he helped start a congregation in Logan, Utah, and returned there on several occasions to preach after retirement in May 1985. He and Vera lived in Guatemala from 1987-92, where he preached in Spanish and assisted local farmers. When they returned to Abilene, they began working with Spanish-speaking members of Graham Street Church of Christ.
Among survivors are Vera (M.S. ’80), his wife of 68 years; four sons, John (’67), Jimmy (’69), David (’72) and Dale (’73); and numerous grandchildren and great-grandchildren.