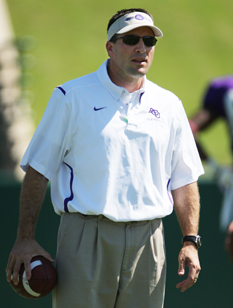 If Chris Thomsen was the architect of ACU’s resurgence as a small college football power the last seven seasons, Ken Collums was the engineer behind the high-powered, record-setting offense that made its success possible.
Today, the Wildcats’ offensive mastermind was named to succeed Thomsen (M.Ed. ’00) as the 19th head coach in ACU history.
Thomsen was hired Dec. 16 as offensive backs coach at Arizona State University, opening the door for Collums to take the lead of a program that has become the new pacesetter in the Lone Star Conference and one of the top performers in NCAA Division II.
Collums has directed the offensive fortunes of Central Arkansas (2000-04) and ACU (2005-12), tutoring standout players at ACU such as quarterbacks Billy Malone and Mitchell Gale and showcasing the talents of future pros Bernard Scott, Johnny Knox, Clyde Gates, Raymond Radway, Tony Washington and Trevis Turner.
The Wildcats have won two of the past four LSC titles, and are one of only four universities to qualify for the NCAA Division II playoffs each of the last six years. Others are North Alabama, Albany State (Ga.) and Northwest Missouri State.