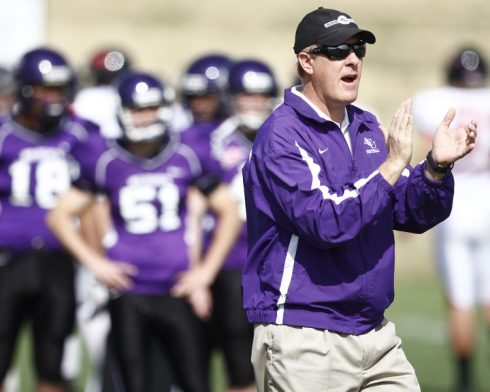 Chris Thomsen (’00 M.Ed.), head coach and architect of Abilene Christian University’s revival in recent years as a small college football power, has been hired as offensive backs coach at Arizona State University, the Pac-12 Conference school announced today.
Thomsen joins new head coach Todd Graham’s staff in Tempe; Graham recently was hired by ASU after one year as head coach at the University of Pittsburgh. ASU plays Boise State University on Dec. 22 in the Maaco Bowl in Las Vegas, Ariz.
ACU athletics director Jared Mosley (’99) named Thomsen’s longtime offensive coordinator, Ken Collums, as interim head coach while a national search begins and high school recruiting continues. Collums has directed some of the most prolific offensive teams and players in NCAA history while also coaching the Wildcats’ record-setting quarterbacks.
Thomsen’s team finished the 2011 season 8-3 overall and 7-1 in the Lone Star Conference, and lost 52-49 to Washburn University in the first round of the national playoffs. ACU is one of only four universities to qualify for the NCAA Division II playoffs each of the last six years. Others are North Alabama, Albany State (Ga.) and Northwest Missouri State.
During Thomsen’s seven-year tenure, the Wildcats were 51-21, won ACU’s first two Lone Star Conference championships in 30 years, and became known as a consistent source of future talent for the National Football League. In March 2011, 17 NFL teams sent scouts to Abilene to evaluate wide receiver Clyde Gates, who was later drafted in the fourth round by the Miami Dolphins, along with wide receiver Raymond Radway and offensive linemen Trevis Turner. Radway was signed by the Dallas Cowboys and Turner by the Pittsburgh Steelers, both as free agents.