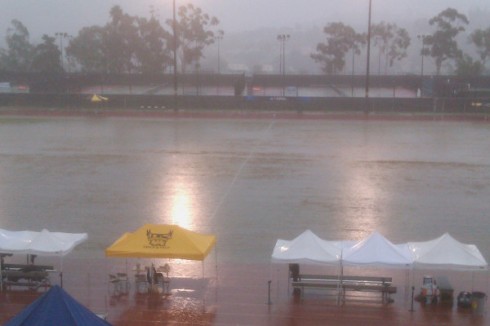 When Albert Hammond and Mike Hazelwood co-wrote the 1972 pop hit, “It Doesn’t Rain in Southern California (‘… it pours, man it pours.’),” they didn’t have the 2011 NCAA Division II women’s soccer tournament in mind.
But they may as well have, because Abilene Christian University’s first appearance in the national quarterfinals on Sunday was swamped by downpours and at times, a flooded field of play. The result was a 1-0 loss to California State, Chico, ending ACU’s sterling season.
Rain began to fall late morning in Los Angeles and continued throughout the match, eventually submerging the playing surface within the Jesse Owens Track on the campus of Cal State Los Angeles. Some felt the match should have never been started, but it was, even though play was eventually suspended with 11:11 before halftime so some of the standing water could be pushed away. The delay lasted 63 minutes.
Even though both teams played under the same conditions, the monsoon clearly had more of a negative effect on ACU, bringing Abilene Christian’s dynamic attacking game to a grinding halt in conditions unfamiliar to the team from drought-stricken West Texas. Passes ACU usually connects with ease through the midfield instead floundered in puddles, and dribbling became a near impossible task.
ACU controlled possession for long periods of time but couldn’t generate a shot powerful enough to get up and out of the water and past Chico State goalkeeper Brianna Furner, who finished with seven saves.
Chico State didn’t have many quality looks either – forcing ACU’s Elliott London to make only three stops on nine shots – but was able to punch one in from the goalmouth at the start of the 14th minute. The score was initiated by a deep throw-in by Blake Lopes that was nicked by London. The ball then landed out of her reach near the far post, where it was first touched by Kasey Wall before Alyx Williams kicked it in.
The goal was Williams’ fifth of the year and sends her team into the NCAA semifinals Dec.1-3 in Pensacola, Fla. ACU’s record for 2011 ends at 20-2-1, the finest in the team’s five-year history.