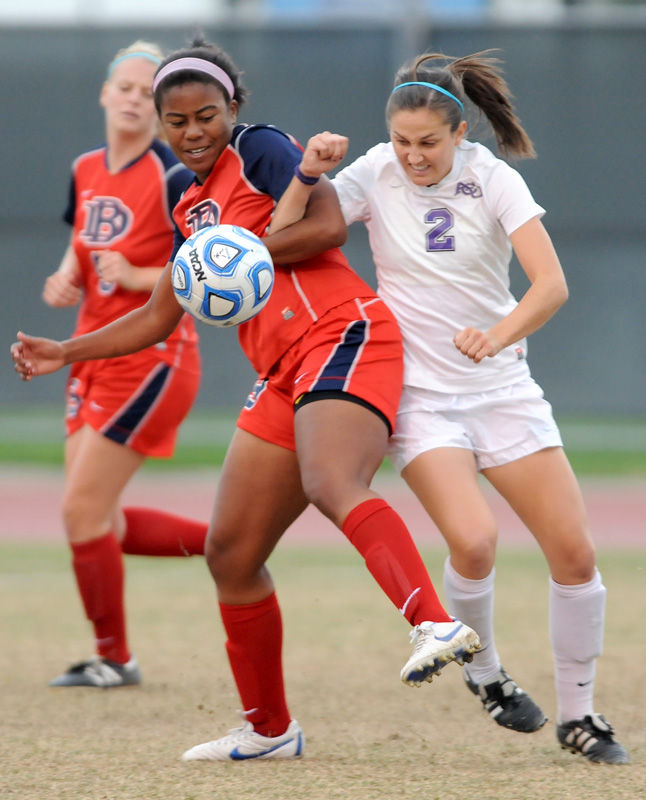 The Abilene Christian University soccer team defeated Dallas Baptist University, 2-1, under the lights on a cool, misty Friday night at Jesse Owens Stadium on the campus of California State University, Los Angeles. The winning goal was struck by Ashley Holton on an assist by Lexi Stirling with 3:56 left in the first overtime.

Next up for the Wildcats (20-1-1) is a match with California State University, Chico (12-6-5) Sunday at 2 p.m. CST in the Elite Eight round of the NCAA Division II Women’s Soccer Championship. Chico State advanced, 4-3, on penalty kicks following a 0-0 tie with Cal State L.A.
Stirling also assisted on ACU’s equalizer in the 56th minute, sending in a free kick that landed behind Dallas Baptist goalkeeper Kerry Edwards after she hit it up the air. When the ball landed, it dropped in front of Andrea Carpenter, who took one step before kicking it into the open net.
The goal was Carpenter’s 16th of the season and Holton’s was her sixth.
Dallas Baptist grabbed the match’s first lead in the 43rd minute when Kourtney Edwards headed in Brittany Layne’s corner kick from inside the six-yard box. The corner kick was DBU’s fifth of the half, while Edwards’ shot was her team’s ninth.
ACU outshot Dallas Baptist, 17-12, including 11-3 over the final 52 minutes.
Wildcat goalkeeper Elliot London made three saves. Edwards had 11 for the Patriots, whose season ends at 16-6-1.

Follow the Wildcats in the NCAA regional tournament on the ACU sports site.