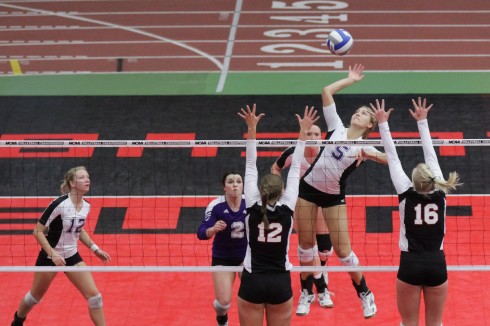 The Abilene Christian University Wildcats gave the nation’s sixth-ranked team all it wanted Thursday night, but the University of Central Missouri escaped the UCM Multipurpose Building with a 3-2 win in the first round of the NCAA Division II South Central Region volleyball tournament.
The Wildcats won the first two sets, 25-22 and 25-21, before losing the next three, 25-8, 25-14 and 15-7, to see their season end in the regional tournament in Missouri for the second straight season.
Head coach Kellen Mock’s young team – which started three freshmen for much of the year – finishes its season 21-14. Central Missouri improves to 28-4 on the season and moves on to face Angelo State at 7:30 p.m. Friday in the tournament semifinals.
Sarah Oxford, 2011 Lone Star Conference Freshman of the Year, led the Wildcats with 13 kills and hit .367 in the match, while senior Jennie Hutt had 10 kills and 12 digs. Senior libero Kelsie Edwards – ACU’s all-time leader in career digs – finished the night with 29 to lead the Wildcat defense.