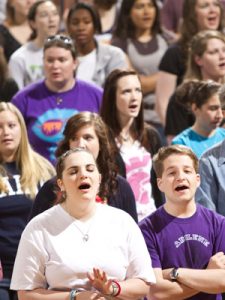 Sunday night I listened to the a cappella singing of more than 800 Abilene Christian University students at their traditional Nine O’Clock devotional in the auditorium at University Church of Christ.
This particular event was not traditional: a special service to comfort the ACU family, which has been reeling from news of last Friday’s bus accident that killed one of our students and sent 11 others to hospitals with injuries, some critical. Three faculty members and the spouse of a professor were injured as well.
Those of us who live in Abilene and work on campus probably take this music for granted. But listening to it is something I recommend everyone do from time to time, should they find themselves doubting the faith of the newest generation of university-age students. Their voices are stunning, their enthusiasm not far behind.
With an exception or two, much of the worship music today’s young people most enjoy singing was written in their lifetimes. But has it always been that way?
One of the great blessings of my life was the opportunity in 1985-86 to coordinate the design and production of Great Songs of the Church, Revised, the last version of one of the iconic hymnals in American Restoration Movement history. Great Songs was an adaptation of Elmer Jorgenson’s original Great Songs of the Church from 1921, which added a supplement in 1922 and preceded Great Songs, Number Two in 1937. I grew up with the latter in my home congregation in Detroit, Mich., in the 1970s.
My role on Great Songs of the Church, Revised was a minor one compared to the years of work of Dr. Forrest McCann, chairman and general editor, and music editor Dr. Jack Boyd (’55) – both professors at ACU at the time, and now retired. Along the way, Jack and I traveled to tiny (population 165) Omaha, Ark., in the Ozark Mountains to work with the late Don Ellingson, who handled our book’s music typography. Ellingson was one of Christian musicology’s pre-eminent craftsmen and we were fortunate to see him at work on one of the last Church of Christ hymnals not produced by computerized typography and page layout.
The experience opened my eyes (and ears) to the world of church hymnody. I won’t be confused with my congregation’s even mediocre singers (I inherited what little was left of my father’s low ability in that regard), but it has now become a bit of personal fascination through the years to observe how a cappella music has evolved in Churches of Christ.
In 1937, president James F. Cox asked the students of Abilene Christian College to list their favorite 10 hymns. The clear winner was “How Shall The Young Secure Their Hearts?” a song written by Isaac Watts in 1719, with a tune attributed to Ludwig van Beethoven. I recall it being sung fairly often at services and youth rallies I attended in the 1970s, a pretty good run up the charts for a 20th-century church hit with roots in Beethoven’s era.
According to Cox’s research, other favorite hymns of 1937-era ACC students included, in no particular order:

I recently asked Mark Lewis (’95), associate dean for spiritual life and chapel programs at ACU, to compile a similar list with input from students who lead worship among their peers. Their response, in order of each song’s current popularity and frequency of appearance in Chapel at ACU:

Today’s university-age students especially enjoy songs of praise, and there seem to be plenty to go around. In fact, each Friday’s 11 a.m. gathering in Moody Coliseum at ACU is for Praise Chapel, where these and other tunes are sung with great vigor.
Church hymnody reflects the culture and other influences in the lives of Christians of each generation. Change doesn’t sit well with everyone, but it is nonetheless constantly at work, considering that church-goers of the era of Thomas and Alexander Campbell, and Barton W. Stone, sang from hymnals with only words, not musical notes, to tunes they committed to memory. Today’s modern hymnals are often in digital form, their music projected on large overhead screens during broad daylight in worship services around the world. Despite the technology, hymnals still reflect tastes in music as varied as church life is today from its Restoration Movement roots on the American frontier.
At ACU, which is a bit of a crossroads of the world (enrolling students from nearly 50 states and territories and more than 40 nations will do that for you), the spirit of such music is alive and well, which is good news for the myriad churches and congregations represented.
ACU students sing for all kinds of reasons; they always have. They did in Beauchamp Amphitheater last Friday night, when more than 1,000 gathered for an impromptu candlelight prayer service for their injured friends. And they did again on Monday morning in Chapel, when the family of Anabel Reid, the 19-year-old sophomore killed in Friday’s accident was present to receive the soul-stirring musical gift our students share so well and freely.
Those voices helped their – and our – healing process begin during what has been a week on the Hill we’d just as soon not repeat any time soon. Thanks to everyone who has helped ease burdens of those affected. You can learn more at blogs.acu.edu/iwanttohelp.