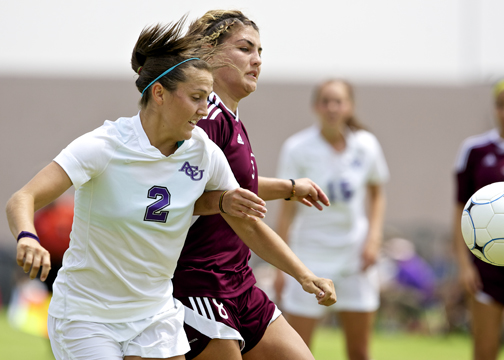 One of the best success stories in Abilene Christian University athletics and Lone Star Conference history is the Wildcat women’s soccer team, which has exceeded all expectations in an amazingly short period of time.
Just five seasons after ACU began an intercollegiate soccer program for women, the Wildcats have rocketed to a No. 2 national ranking, first place in the LSC (15-0-1 overall, 11-0-1 in the LSC) and will host the conference tournament next week.
Until 2007, ACU hadn’t added a women’s sports program since softball began in 1997. Women’s athletics mushroomed on the Hill in the late 1970s, thanks to Title IX legislation, which mandated colleges and universities create more scholarship programs for women. Today, women at ACU compete in soccer, cross country, basketball, indoor and outdoor track and field, tennis and softball.
Casey Wilson (’99) was named ACU’s first women’s soccer coach, and within two years, had the Wildcats in the LSC tournament (they qualified in 2008, 2009 and 2010), and in 2010, six of his players were named first team all-LSC.
Recruiting collegiate players is made easier because of how youth soccer programs thrive in Texas. Fourteen of the Wildcats’ 22 players hail from the Lone Star state.
ACU’s top player, sophomore Andrea Carpenter (pictured here), is from Amarillo, and has taken the LSC by storm. As a freshman in 2010, she set the university’s single-season scoring records for goals (21) and points (46), which also made her ACU’s career leader in both categories. She led her team to a 17-3 record, the LSC title and a berth in the NCAA regional tournament. Carpenter and teammate Ashley Holton (14 goals, 32 points) combined to form one of the top duos in women’s collegiate soccer. This season, Carpenter and Holton again rank 1-2 in the LSC in scoring and points.
The Wildcats’ final two matches of the regular season are 6 p.m. tonight in Wichita Falls against the LSC’s No. 2 team, Midwestern State, and 1 p.m. Sunday at home against West Texas A&M.
The LSC tournament is Nov. 3-6 in Abilene, and there is a possibility the Wildcats also could host the NCAA regional tournament as well. The national tournament is Dec. 1-3 in Pensacola, Fla.