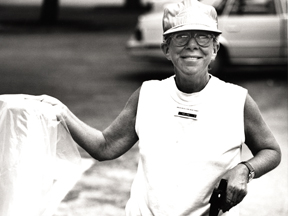 Helen Ellison, the winsome and loving groundskeeper who was one of the most endearing figures on campus for two generations of Abilene Christian University students, faculty and staff, has died at age 78.
Ellison died Oct. 9 in Abilene and a memorial service will be held in her honor at 2 p.m. Oct. 13 in the University Church of Christ chapel. ACU chancellor Dr. Royce Money (’64) and Dr. Bill Spencer, chaplain of the Abilene Center for Supported Living (formerly the Abilene State School), will officiate.
Born May 15, 1933, to Oscar and Emma Lee Ellison of San Antonio, Helen moved to Abilene in 1968 from the Austin State School, then lived at the Marbridge House for Women, where she developed skills for independent living. When she was no longer able to live independently, she moved to the Chisholm House, then to a group home for women at the Abilene Center for Supported Living. She lived the past few years in its Alzheimer’s Care Unit.
Helen worked 33 years for ACU in dormitory maintenance and groundskeeping. The university honored her with a Serving Award in 1988, the Unsung Servant Award in 1997, and with a retirement event in 2001. She was voted by students to be one of the grand marshals of the 1999 Homecoming Parade. The women of Ko Jo Kai social club considered her an honorary Kojie, making her a regular special guest at club events and sponsoring Helen’s birthday parties.
Memorial gifts to honor her life can be made to the Helen Ellison “I Love You” Scholarship Fund at ACU, which was established at her retirement in 2001.