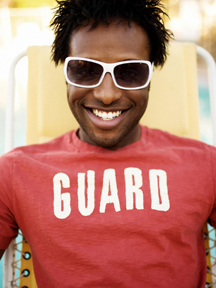 Sunday Ibok (’06), a graduate of Abilene Christian University’s theatre program, died Thursday after suffering a brain aneurysm four days earlier, and an outpouring of prayers and support on Facebook quickly ensued from friends in all areas of Ibok’s life.
Ibok, who took part in “Seussical,” “Jekyll and Hyde,” and the Centennial Pops Concert during his time at ACU, most recently worked in New York City as an actor and a fashion consultant and was an integral part of Trinity Grace Church.
With his sudden passing, Sunday’s friends rallied to support the family of the 32-year-old and his family.
Just hours before Ibok was hospitalized with an aneurism, he posted a one-word message on Twitter and Facebook: Faithful. His friends say it characterized not only his last hours, but his life.
Among many of the blogs that posted tributes to Sunday after and just before his passing, friend and Trinity Grace member Eric Corpus described Sunday’s personality and his role in his faith community.
“Sunday serves as a greeter at church, holding watch on the sidewalk for anyone and everyone arriving. More high-fives, handshakes, and hugs take place here than at any other time or place on the Upper East Side …” Corpus said. “Most of us, whether as friends, spouses, or parents, talk about scheduling ‘quality time.’ It’s not really a talking point for Sunday; he lives it. He spends time with people to simply be with them. And Sunday loves Jesus.”
Jeff Rogers (’02), a fellow-New Yorker and ACU alumnus who works as a graphic designer, channeled his grief creatively into a design based on the word “Faithful” and decided to offer it as a print with all profits going to support the Ibok family with medical bills and final expenses.
“Sunday was a dear, dear friend, and there are literally hundreds of people who could say the same exact thing,” Rogers said. “I’ve heard several people say (and this is true of me, too) that Sunday had friends in every circle of their lives. I was shocked to know that my ACU friends, New York friends, work friends, family, etc., all knew him. He was truly an amazing person and this loss will be felt deeply literally by hundreds of people.”
Prints of Rogers’ work “Faithful” can be purchased online. Funeral details and another way to support the family financially can be found on Trinity Grace Church’s memorial site for Sunday.