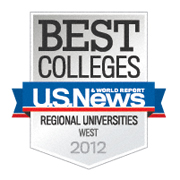 Abilene Christian University received a number of notable recognitions this week in the 2012 “America’s Best Colleges” publication by U.S. News & World Report, including another No. 1 ranking in its region and classification as an Up-and-Coming School.
That makes three of the last four years for ACU to be at the top of a category identifying institutions making high marks for innovation in higher education.
Another honor from U.S. News also stood out: kudos for the way ACU treats freshmen.
ACU is one of only 18 institutions in the nation saluted by U.S. News for having a stellar First-Year Experience, including Stanford University, the University of Notre Dame and Purdue University. In that research conducted by U.S. News, Abilene Christian was one of the most-mentioned colleges and universities in a survey of college presidents, chief academic officers, deans of students, and deans of admissions from more than 1,500 schools.
The university’s First-Year Program is directed by Dr. Eric Gumm (’97 M.S.) and includes Passport student/parent orientation and Welcome Week, among a campus-wide, year-long commitment to help new students succeed intellectually, socially and spiritually. ACU reported a 4.6 percent increase in the freshman-t0-sophomore retention rate this fall, an excellent indicator that first-year students like what they find in their new college home.
News of ACU’s other high-fives from U.S. News include recognition for its commitment to undergraduate teaching, and value.
Abilene Christian fared extremely well in three magazines this fall with special editions ranking the top American colleges and universities, including Forbes and The Princeton Review.