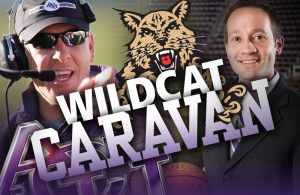 Abilene Christian University fans are guaranteed a sports smorgasbord when the Wildcat Caravan travels to major cities in Texas next week.

The ACU football team coached by Thomsen (M.Ed. ’00) is nationally ranked in 2011 preseason polls after finishing 11-1 in 2010 and winning the Lone Star Conference South Division title for the second time in three years. The Wildcats play another national title contender, the University of North Alabama, on Sept. 17 in the Lone Star Football Festival in Cowboys Stadium in Arlington.

This fall, McCasland enters his first season as ACU men’s basketball coach after leading LSC rival Midwestern State to consecutive appearances in the NCAA Division II Elite Eight the past two seasons, and a 56-12 record. Before that, he coached Midland College to a 143-32 record in five seasons, including the national junior college national title in 2006-07.