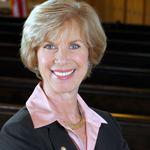 Janice Hahn (’75), three-term member of the Los Angeles City Council, has become the second Abilene Christian University graduate to be elected to the U.S. House of Representatives, joining U.S. Rep. Ted Poe (’70) of Houston.
She won a runoff election last night over Republican Craig Huey to represent California’s Congressional District 36. Hahn won 54.6 percent of the runoff vote, following a May 17 special election in which she and Huey finished atop a field of 16 candidates.
In June 2010, Hahn finished second in an election bid to become California’s lieutenant governor.
Hahn will replace Rep. Jane Harman, who retired in late February, and represents Los Angeles County voters in communities such as Redondo Beach, Manhattan Beach, Torrance, El Segundo, Venice, Wilmington, Marina del Rey, and San Pedro.
She comes from a family of public servants: her brother, James Hahn, was mayor of L.A. from 2001-05; her father, Kenneth Hahn, was L.A. County supervisor for 40 years, and a member of the City Council; her uncle, Gordon Hahn, was a state assemblyman and an L.A. councilman; another uncle, John Hahn, was L.A. assistant county clerk; and a cousin, Dale Hahn, was a Superior Court judge in San Mateo County from 1987-2004.
Hahn’s last-minute campaigning was cut short by the expected death of her 86-year-old mother, Ramona, who lived in San Pedro, as does California’s newest congresswoman.
“The daughter of missionaries, our mother lived her life devoted to God and her family,” said a statement from the family. “She was, without a doubt, the driving force behind our entire family. It was through her strength and support that our father, Kenny, become one of the most beloved leaders in Los Angeles’ history.”
Back on campus, Hahn remembers being one of the few students to wear a Willie the Wildcat athletics mascot costume, according to a story in The Optimist when she was at ACU in March for a speaking engagement.
“I tried out for varsity cheerleader and lost. It was more devastating than any political battle I’ve ever lost,” joked Hahn, who also was member of women’s social club Sigma Theta Chi. “I talked to the basketball coach about being the mascot. My friends made me a costume. I just remember it being furry and hot – but it was worth it.”
“We appreciate her taking the time to visit campus during the campaign,” said Dr. Neal Coates (’87), professor and chair of political science. “She recently spent an entire day here visiting with the Jack Pope Fellows and speaking to our student body in Chapel, and they all benefited from her comments and advice.”
The Jack Pope Fellow Program at ACU honors alumnus Jack Pope (’34), former chief justice of the Texas Supreme Court, and helps students prepare for careers in public service. The university also offers an interdisciplinary minor in public service through its Department of Political Science.