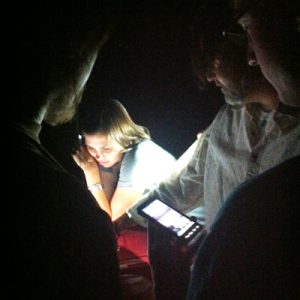 Who says there’s nothing to do in Abilene, at night, in the middle of summer? One Abilene Christian University professor and his students – armed with flashlights and iPhones – set out to solve an otherwise storied Big Country phenomenon with paranormal leanings.
Final score: ACU Department of Psychology 1, Anson Light 0
For many years, adventuresome teens and other students have headed north on U.S. 183 in hopes of seeing the Anson Light. The mystery is now solved, as Beck writes about in detail on his blog, Experimental Theology.
The Anson Light – which is best seen near a cemetery, of course, in the town of Anson, 25 miles north of Abilene – has been documented in a report by the Southwestern Ghost Hunters Association, in Texas Monthly magazine, and on the TV show, “Unsolved Mysteries.”
Dr. Richard Beck (’89) and his students, using Google map and GPS features of their iPhones, checked out all the possible angles on several of the dusty back roads of Anson, which is named after Dr. Anson Jones, the last president of the Texas Republic.
Forbes.com technology columnist Alex Knapp picked up on the story, hailing Beck and his students for their ingenuity and “fantastic work.”
Paranormal activity-debunking was probably not envisioned by the two Apple co-founders named Steve (Jobs and Wozniak), nor the thought-leaders behind ACU’s Connected mobile-learning initiative that puts iPhones, iPod touches and iPads in the hands of all students.
But teachable moments come in all shapes and sizes, and places in the road. In this one, no one got lost, no rattlesnakes were stepped on, and a road trip to Anson is now one less reason for ACU undergraduates to stay out past curfew.