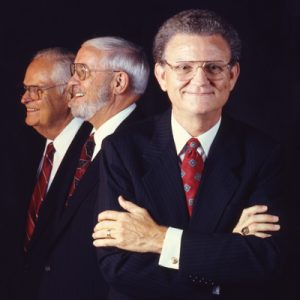 Although it was not likely a prerequisite for their selection, Abilene Christian University’s three past presidents – plus its founder – were all born the same week in the middle of July.
This photographic portrait of the most recent trio – (from left) Drs. John C. Stevens, William J. Teague and Royce L. Money – appeared on the front cover of the Fall 1991 issue of ACU Today magazine.
Stevens, ACU’s eighth president, was born July 15, 1918, and died in 2007. Teague, its ninth president and chancellor emeritus who lives in Abilene, was born July 12, 1927. Money, the university’s 10th president and current chancellor, was born July 13, 1942.
ACU’s founder and first president, A.B. Barret, shared a birthday with Stevens – July 15. Barret, who began Childers Classical Institute in 1906 on a campus near North First Street in Abilene, was born in 1879 and died in 1951.
The mid-summer birthday trend ended when trustees selected Dr. Phil Schubert, the institution’s 11th and current president, in 2010. His birthday is next month: August 20.