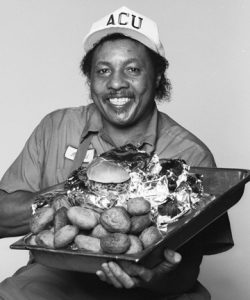 If the sign on the door is accurate, connoisseurs of Harold’s Pit Bar-B-Que in Abilene may have only about 30 days to get their fill of a culinary tradition known far and wide.
Harold Christian, who inherited the business started by his father, Toby, in July 1956 and changed its name to Harold’s in 1972, is closing it “temporarily” July 30. “Further plans are indefinite,” the sign goes on to say. The eatery is a favorite of Abilene Christian University students, faculty, staff and alumni, who often help pack the small dining room at lunchtime, especially on Fridays.
A railroad cook and son of a local cafe manager, Toby Christian got his start in the food business by selling barbeque from the side of his family’s house in the East Texas town of Winnsboro. He moved his family to Taylor, near Austin, and later, to Abilene when an entrepreneur helped him open a restaurant in ACU’s hometown. Harold was often allowed to run the restaurant himself, beginning at age 13. He is now 65, and experiencing health challenges.
The late Don T. Morris (’91) who went on to serve from 1992-95 as director of public relations at ACU, wrote a story in the March 13, 1991, issue of The Optimist, titled “Harold: Man, Myth, Barbeque Visionary”:

Whack – the meat cleaver crashed onto the greasy wooden chopping block. Whack, whack, whack – today is a bad day to be sausage.
“What ya’ll gonna have to eat,” growls the big man holding the big knife.
First-time customers of Harold’s Bar-B-Que may be tempted to say, “Whatever you want me to eat, sir.”
Just an arm’s reach away, Harold Christian strikes an intimidating stance. He looks more like a prize fighter staring down his opponent than someone about to serve a meal. Sweat beads o his face, giving it a coal-like shine. The black curls of his hair sneak out from under a red Harold’s baseball cap. He wears a matching red apron with enough brisket fragments stuck to it to make a chopped sandwich.
The soot-covered barbeque pit behind him, which looks like a locomotive fire box, adds to the heat and harshness of the scene. A pile of wood is stacked to the side, waiting to be shoved into the pit’s belly.
Just before the customer fears for his life, Harold flashes a saucy grin.
“You want some cornbread?” he asks.
Relieved, the customer takes a down-home plate of barbeque, dripping with dark, mysterious sauce, and finds a seat in the cement-block building on the corner of North 13th and Walnut.
The John Henry of a man behind the counter, sweat still on his scowling face from the heat of the pit, turns to the next in line and begins to growl.
“What ya’ll gonna have to eat?”

Harold’s silky smooth voice is a fixture in church; he served for years as president of the Mt. Moriah Baptist Choir. Before that, he spent many a night singing and playing the saxophone around West Texas with groups such as Big Tex and the Honeydrippers, belting out rock ’n’ roll and blues for meager pay. As Morris’ feature story explains:

The pay, or lack of it, was a key in Harold’s decision in 1975 to sing gospel music exclusively.
“I felt like if I was going to play or sing all night with no pay, I might as well do it for the Lord, if there wasn’t going to be any money in it,” he said. “I don’t enjoy that other stuff; I just love to sing gospel music.”
The blues make Harold sad, but gospel music lifts him up.
“That’s the way I’m able to go on,” he says. “Lose your mother or father, but life goes on. Somebody makes me do it. I’m not doing it on my own.”
Harold is referring to God.
“He’s had a lot to do with this thing,” Harold says. “Yip, He’s been real good to us.”

He has sung in the middle of a field for drug awareness, at Abilene’s All-America city banquet, for senior citizens at the Taylor County Coliseum, and in front of the county court house for the troops in the Persian Gulf. He has sung at churches, banquets, weddings and citywide gospel meetings.
“I’ve probably forgotten half of the places I’ve sung,” he says. “When I go catering I sing, sing in here all the time, especially during Sing Song and Lectureship; I just get up and sing. I don’t have to have nothing special to sing.”

The restaurant’s ribs, chopped brisket sandwiches, hot-water cornbread and assorted sides and desserts are always on the menu, but the man and his music are often the daily special, as this video singalong of “How Great Thou Art,” and this one, too, demonstrate. Harold’s ACU faithful often request he sing a verse of “His Eye is On the Sparrow,” but Christian sometimes chooses to perform his own variations on pop/R&B music such as “[Jesus is the] Best Thing That Ever Happened to Me.”
Regardless of your taste in music, if you’re a fan of Harold’s unique recipe for barbeque that’s also good for your soul, you’d do well to order a plate of it while you can.