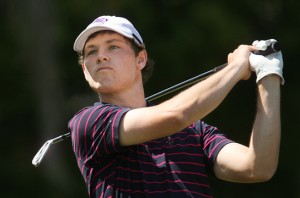 You couldn’t blame young Alex Carpenter if his wish list for Santa is a little short this December. A number of the Abilene Christian University golfer’s days the past 12 months have already felt like Christmas morning.
The list of hard-earned presents under his tree is impressive.
Carpenter won the prestigious 104th Southern Amateur in July 2010 after a freshman year when he helped lead ACU to a Lone Star Conference title and won the Phil Mickelson Award from the Phil and Amy Mickelson Foundation as the top freshman in NCAA Division II. The Southern Amateur win earned him a spot in the 2010 U.S. Amateur Championship, and an invitation to participate as the only amateur in the 2011 Arnold Palmer Invitational at Bay Hill Club and Lodge, where Carpenter became the first current ACU student to play in a PGA Tour event. Carpenter missed the cut for weekend play, but shot a 69 in the second round.
He went on to win seven tournaments (including six straight) in his 2010-11 sophomore year, helping the Wildcats win the NCAA regional title and finish third in the national tournament.
Carpenter was recently named one of five collegiate golfers to receive the 2011 Jack Nicklaus Award, presented by the Golf Coaches’ Association of America to the top golfer in each division (NCAA I, II and III, NAIA and NJCAA). The award was presented June 5 by Nicklaus himself at the PGA legend’s Memorial Tournament in Dublin, Ohio.
Beginning Thursday, Carpenter will play in the 15th annual Palmer Cup, pitting the top amateurs in the United States against those from Europe. He will be the only collegiate player on the U.S. team who is not from a NCAA Division I university. The Palmer Cup is a Ryder Cup-style event played June 9-11 at The Stanwich Club near Greenwich, Conn. The U.S. leads the series, 7-6-1.
A GolfWeek video preview of Palmer Cup participants can be viewed here, and a video profile of Carpenter by GolfWeek can be viewed here. You can follow the scoring this week in the Palmer Cup here.