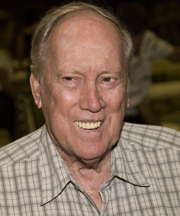 Livestock judging teams at Abilene Christian University didn’t have to look far for inspiration and advice when Dr. Leo Edwin “Doc” DuBose was around.
DuBose, who taught animal science courses and mentored award-winning judging teams at ACU for 41 years, was on several of them while a student and led others as a beloved faculty member at his alma mater.
The professor emeritus of agriculture died May 28 in Abilene at age 80.
Doc was loved and respected by decades of students,” says Dr. Foy Mills, professor of agribusiness and former chair of the Department of Agricultural and Environmental Sciences. “His kind demeanor, coupled with his high expectations, drew students to him.”
Born in 1931 in Gonzales, Texas, DuBose earned his bachelor’s from ACU in animal science in 1952, his master’s degree in animal science and nutrition from South Dakota State University in 1954 and his Ph.D. in animal breeding and statistics from Texas A&M University in 1965. He taught at SDSU from 1952-54, at Angelo State University from 1957-62 and at A&M from 1963-65. DuBose also studied computer programming at the University of Louisiana at Lafayette in 1960, and mathematics at the University of Arkansas in 1962, both while a fellow of the National Science Foundation.
He joined the ACU faculty in 1965 as assistant professor and officially retired in 1993, but continued to teach classes until 2006. He was the Bray Cook Professor of Animal Science from 1989-93.
Named in 1988 to the National Collegiate Livestock Coaches’ Hall of Fame, he traveled tens of thousands of miles with ACU students to competitions around the nation, and directed numerous judging competitions. He led more than 300 ACU  students on highly competitive livestock, horse, and wool and mohair judging teams.
His judging teams regularly won competitions against major state universities at the Houston Livestock and Rodeo Show, the Fort Worth Fat Stock Show, the American Royal Livestock Show (Kansas City, Mo.) and the Mid-South Fair Intercollegiate Livestock Judging Contest (Memphis, Tenn.). DuBose also judged contests at the San Antonio Livestock Exposition, the American International Charolais Association, and the National Livestock Fair in Santo Domingo, Dominican Republic.
“Doc was an inspiration to students and colleagues alike because of his hard work and untiring pursuit of excellence,” says Dr. Ed Brokaw (’71), Bray Cook Professor of Animal Science at ACU. “Although he was physically impaired by the effects of polio he contracted while in graduate school, he never complained or slacked off. This probably was most demonstrated in his competitive drive to train the best livestock team possible. I can still hear him saying, ‘Come on, men!’ any time they began to lag. Having traveled many miles with him as a student and a colleague, I can testify to the rigorous schedules his teams followed. Yet they loved him because he obviously cared for them and they experienced the rewards of that hard work.”
He presented his own research numerous times to colleagues at annual meetings of the American Society of Animal Science, was published in the Journal of Animal Science, and received a Teacher Fellow Award from the North American Colleges and Teachers of Agriculture (NACTA).
He was president of the national Block and Bridle Club (1971-79), director of the Abilene Boys Ranch (1973-76), and a member of the Board of Directors of the West Texas Fair (1973-76).
DuBose married Florene Joy Adams in 1951, and she died in 1984.
Among survivors of the longtime elder at Hamby Church of Christ are Jean, his wife of 23 years; sons Dr. Clifton DuBose (’76) and Charles DuBose (’84); a daughter, Karen (DuBose) Buckles; eight grandchildren; and five great-grandchildren.
A memorial service is planned for June 2 at 10 a.m. in Abilene’s Hillcrest Church of Christ in Abilene.