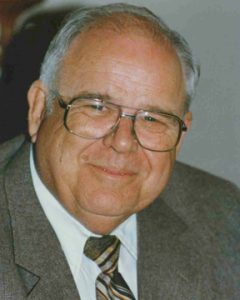 James E. Fulbright (’47), a World War II hero who managed Abilene Christian University’s campus bookstores and ACU Press for 42 years, died May 21 in Abilene at age 88.
He and his late sister, Joyce (Fulbright ’46) Whitefield, director of alumni files and development records, served a combined 84 years as full-time staff members for their alma mater.
A native of Gray County, Texas, Fulbright began work at ACU in 1950 as manager of its bookstore, an enterprise he coordinated for the university until his retirement in 1992. He was named director of bookstores in 1985, including Abilene Educational Supply.
His work overseeing a growing university press encompassed the publishing of hundreds of titles, including Great Songs of the Church – for years the most widely used hymn book among Churches of Christ – and the James Burton Coffman series of Bible commentaries.
“James Fulbright was responsible for the early progress of ACU Press,” says Dr. Leonard Allen, director of ACU Press, and author of The Cruciform Church and Distant Voices. “He was a good manager and knew how to get things done. He was steady over the long haul, and always displayed a positive spirit. He encouraged me with my first books and opened the door for their publication. James faithfully served ACU in many ways for a long, long time.”
While enrolled as an ACU student in 1943, he left to serve in the Pacific theatre of World War II, where Fulbright was awarded a Presidential Unit Citation for “extraordinary heroism in action against an armed enemy,” earned during the battles of Saipan and Tinian while serving as a sergeant, driving an armored amphibious landing craft dubbed the “Texas Tornado” for the U.S. Army. He also participated in assault landings of Geruma and Tokashiki, and was a short distance away from war correspondent Ernie Pyle when Pyle was killed in the battle of Ie Jima.
While training in the Philippines for Operation Olympic – a U.S. invasion of Japan that was planned but never took place – Fulbright was assigned to escort a Chinese general, and the pair ended up at a memorable private dinner one night with U.S. wartime legends General Douglas McArthur, Admiral Chester Nimitz and General Jonathan Wainwright.
After the war, Fulbright resumed his studies at ACU, where he met Frances Janet Gibson (’47) in a business law class. The two married in 1948, and she died in 2007.
He became a popular Bible class teacher and minister for Churches of Christ in Olden, Clyde and Ballinger, as well as Jones County congregations that previously met in farming communities near Hodges (Hope Church of Christ) and Swans Chapel. Fulbright preached for the Hope congregation for 19 years. He also helped establish and support a Church of Christ in San Pedro, Coahuila, Mexico.
Among survivors are a son, Dr. Timothy Fulbright (’76) and three grandchildren.
A memorial service will be held May 26 at 10 a.m. at Hillcrest Church of Christ in Abilene.