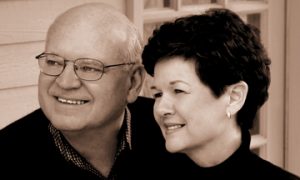 With 618 new graduates looking on, Abilene Christian University utilized its two Commencement exercises May 14 to honor the namesakes of a new ACU award designed to recognize people who model what it means to make a real difference in the world.
Annually, the Dale and Rita Brown Outlive Your Life Award will spotlight individuals who have made a lasting impact on the lives of others. With permission from the publisher, the award takes it name from Outlive Your Life: You Were Made to Make a Difference, a 2010 book by 1977 ACU graduate Max Lucado, a minister and best-selling Christian author. In its pages, Lucado challenges readers from all walks of life to take what God has given them and help others.
The award is designed to recognize all types of servant leadership including civic and community contributions, meeting spiritual and/or physical needs, producing changes with generational impact, helping redirect the course of people’s lives, and inspiring others to make an eternal difference. Recipients may be alumni or friends of the university, though not necessarily with a history of financially supporting ACU.
The inaugural recipients honored May 14 were the Browns, a godly couple who for nearly half a century have powerfully partnered to use the blessings God has given them to be a blessing to others. Their life ethic echoes throughout the ninth chapter of Outlive Your Life – “Do Good, Quietly” – in which Lucado lists three ways to live authentically: expect no credit for good deeds, give financial gifts in secret and don’t fake spirituality.
Both are graduates of Pepperdine University, but all six of their children – Tod (’87), Cary (’89), Trisha (Brown ’90) Wall, Alan (’92), Randy (’94) and April (’00) – are graduates of Abilene Christian. Bailey Brown, the first of their 22 grandchildren, graduated May 14 from ACU.
An accountant by training, Dale is founder and president of Petroleum Strategies. He served on the university’s Board of Trustees from 1988-2011, and is a longtime elder of the Golf Course Road Church of Christ in Midland, Texas.
The Browns have been invaluable leaders for Midland Christian School.
They devoted several years of their lives to planting churches and supporting missions efforts in Brazil, as did Lucado and his wife, Denalyn (Preston ’79). Since returning to the States in 1973, the Browns have been strong advocates and participants in missions training and support through their home congregation and ACU.
Their son, Randy, is a Fort Worth physician profiled in ACU’s 2011 President’s Circle film, which can be viewed here.