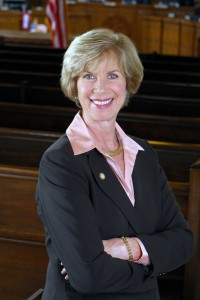 Janice Hahn, a 1975 graduate of Abilene Christian University, was the top Democratic vote-getter in a recent primary and will face Craig Huey in a runoff to represent California’s Congressional District 36 in the U.S. House of Representatives.
Hahn, a three-time member of the Los Angeles City Council, received 24.7 percent of the vote, besting a field of 16 Democratic candidates in the May 17 special election to replace Rep. Jane Harman, who retired in late February. Huey, a political commentator and marketing consultant, narrowly won the Republican primary vote, beating Secretary of State Deborah Bowen.
The runoff election will be July 12 and represent Los Angeles County voters in communities such as Redondo Beach, Manhattan Beach, Torrance, El Segundo, Venice, Wilmington, Marina del Rey, and San Pedro.
Hahn was on campus March 21 to visit with the Jack Pope Fellows and to speak in Chapel.
She comes from a family of public servants: her brother, James Hahn, was mayor of L.A. from 2001-05; her father, Kenneth Hahn, was L.A County supervisor for 40 years, and a member of the City Council; her uncle, Gordon Hahn, was a state assemblyman and an L.A. councilman; another uncle, John Hahn, was L.A. assistant county clerk; and a cousin, Dale Hahn, was a Superior Court judge in San Mateo County from 1987-2004.
In June 2010, Hahn finished second in an election bid to become California’s lieutenant governor.