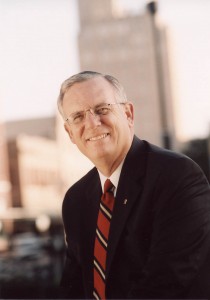 Dr. Norm Archibald (’76 M.S.) was elected to his third term as mayor of Abilene on Saturday, easily besting Pat Hippely, co-founder of the Taylor County Tea Party.
When he finishes his three-year term, Archibald will become the longest-serving mayor of Abilene Christian University’s hometown since ACU vice president Dr. Gary D. McCaleb (’64) in 1990-99. Only one other person has been mayor of Abilene longer than McCaleb: E.N. Kirby, who took office the same year as ACU’s founding in 1906, and served 13 years.
Archibald finished the last year of former mayor Grady Barr’s term in 2004, and was re-elected twice before Saturday’s win. One of his chief priorities is ensuring a dependable water supply for the city’s future, including construction of the proposed but controversial Cedar Ridge Reservoir on ranch land northwest of Abilene.
“The future of Texas will be determined by those who have water and those who do not have water,” Archibald told the Abilene Reporter News in a pre-election Q&A. He says Abilene would not enjoy its current-day economic success had it not been for forward-thinking city leaders who negotiated water usage plans in the past half-century. Abilene currently receives most of its water supply from Fort Phantom Hill, Hubbard Creek and O.H. Ivie, three reservoirs on watersheds often severely affected by Texas’ persistent periods of drought and arid conditions, even in “wet” years.
The 60-year-old Archibald, vice president of Hendrick Health System, previously served two terms on Abilene’s City Council.