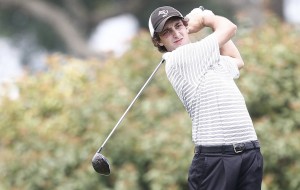 For the second consecutive year, Abilene Christian University’s Cyril Bouniol finished atop the leaderboard at the NCAA Division II South Central / Midwest Super Regional golf tournament, helping his team qualify for the national tournament.
The Golf Coaches Association of America announced this week that Bouniol, a senior from France, is the winner of the prestigious 2011 Byron Nelson Award by Cleveland Golf/Srixon, in cooperation with the Four Seasons Resort and Club Las Colinas and the Salesmanship Club of Dallas.
Coincidentally, Bouniol also receives the Byron and Peggy Nelson Scholarship at ACU, where the golf program is endowed in Nelson’s name. Nelson, who died in 2006, was a legendary PGA golfer who also served as a member of ACU’s Board of Trustees.
Bouniol was first-team PING Golf all-America last year as a junior, and won the Arnold Palmer Award as individual medalist at the NCAA Division II tournament.
Read more about the Wildcats tying for the 2011 regional title here. Bouniol, Alex Carpenter – arguably the hottest U.S. collegiate golfer this year – and their teammates are now preparing to play May 17-20 in the NCAA national tournament in Muscle Shoals, Ala.