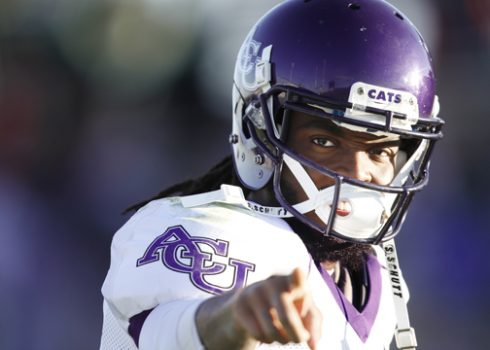 Edmond Gates’ improbable rise – from unrecruited walk-on four years ago at Abilene Christian University to pro football prospect as a senior – crested when he was selected Saturday by the Miami Dolphins in the fourth round of the 2011 NFL Draft.
Gates, the fastest wide receiver in the NFL Combine earlier this spring, became the 111th college football player chosen at Radio City Music Hall in New York City, joining the Dolphins, who finished 7-9 in 2010 and wanted the Vernon native’s blazing speed in its offense.
As a freshman in 2007 who had only played football in ninth grade, he accumulated 876 all-purpose yards and scored five touchdowns. His game-breaking speed showed catching passes as a wide receiver, turning the corner on end-arounds, and returning kicks. An injury kept him out of two games his sophomore year, but he still managed 716 yards receiving and eight TDs, and ran 11 times for 94 yards and another score. He emerged as the top wide receiver in the Lone Star Conference in 2009, totaling 702 yards and five TDs, and averaging 14.3 yards per catch.
His senior year was a highlight reel. Gates caught 66 passes for 1,182 yards (17.9 yards per catch) and 13 TDs, helping the Wildcats to their second LSC South Division title in three years, an 11-1 record and the second round of the NCAA Division II playoffs. He was named first-team all-America and was invited to play in the Under Armour Senior Bowl in Mobile, Ala.
Gates was the first NCAA Division II player chosen in the 2011 NFL Draft. His cousin is Cincinnati Bengals running back and kick-returner Bernard Scott, ACU’s career rushing leader. “They can teach you how to be a better blocker, a better route runner, but they can’t teach speed, and speed is what he’s got,” says Scott. “This league loves speed.”
Read more on Gates’ big moment here. Video highlights of his last two seasons can be seen here and here.