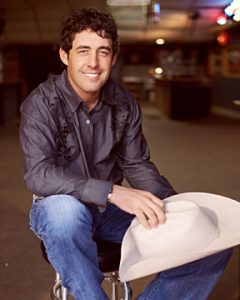 Friends and family of country recording artist Aaron Watson (’00) were on campus last night to see him receive Abilene Christian University’s 2011 Young Alumnus of the Year award.
“Aaron is the epitome of what the Young Alumnus of the Year represents. Since his graduation, he has brought prestige and honor to the university both personally and professionally, through his performance on stage and as a businessman with his own record label,” says Jama Cadle, who has been serving as ACU’s interim director of alumni relations. “Aaron is always quick to promote his alma mater and share how ACU was influential in his life. He is most deserving of this recognition.”
He has a busy concert and tour schedule, has recorded 11 albums and owns his own growing company, Big Label Records. Ray Benson, leader of legendary western swing band Asleep at the Wheel, has produced several of Watson’s hit songs.
On stage and off, Watson is well known for his Christian witness in an industry often lacking such. As he reflects in his Barbed Wire Halo Blog, “An old cowboy preacher, after one of my Fort Worth shows seven or eight years ago, put it best when he said, ‘Aaron, in the end, selling a million CDs will be worthless if you aren’t glorifying God while doing so.’ Well that ol’ preacher hit the nail on the head but this was something I had always known in my heart but had never backed up with my actions. I knew I wasn’t giving God my best and it was time to step it up a notch.”
ACU’s honor, selected by its Alumni Advisory Board, is evidence he has.