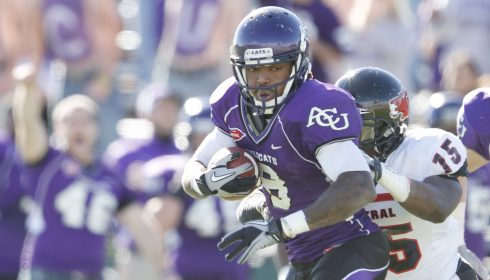 Edmond Gates has had several fresh starts in life. April 28 will be another, when the former ACU all-America wide receiver hopes to be selected by a pro football team in the 2011 NFL Draft at Radio City Music Hall in New York City.
Gates’ stock among teams has skyrocketed since he raced to the fastest 40-yard time among wide receivers invited to the NFL Scouting Combine in late February. Representatives from 17 NFL teams showed up in Abilene on March 21 to further test the Wildcat receiver, and experts such as former Dallas Cowboys’ draft guru and current NFL.com writer Gil Brandt are raving about Gates’ ability:

“During his individual workout, Gates was outstanding, looking more advanced than Bears WR Johnny Knox, another Abilene Christian alum who was named to the Pro Bowl as a rookie in 2009 and has done pretty well for himself overall in the NFL.”

Dallas Morning News sportswriter Rick Gosselin says Gates has the talent to become a second-round draft pick. Former ACU wide receiver Johnny Perkins, who died in 2007, was a second-round selection of the New York Giants in 1977. And defensive back / kick returner Danieal Manning, now a member of the Chicago Bears, was that team’s first pick (and the 42nd overall) of the 2006 NFL Draft.
And Gates may not be the only former Wildcat selected by a pro team. ACU offensive guard Trevis Turner is projected to be a seventh-round pick in the 2011 NFL Draft. The 6-7, 342-pound senior from DeSoto was named first-team all-America by Daktronics and Associated Press, and played in the NFLPA (National Football League Players Association) all-star game in San Antonio. He also starred in the Cactus Bowl, where he was named Jim Langer Offensive Lineman of the Game.
Grant Boone (’91) profiles Gates’ fascinating story of rising above his tough upbringing in “Wide Open,” the Bonus Coverage of ACU Today magazine’s Spring 2011 issue:
[issuu layout=http%3A%2F%2Fskin.issuu.com%2Fv%2Flight%2Flayout.xml showflipbtn=true pagenumber=56 documentid=110427154141-391cda4a09074782b382e49378331a06 docname=acu_today_spring_2011 username=abilenechristian loadinginfotext=ACU%20Today%20Spring%202011 showhtmllink=true tag=acu width=420 height=269 unit=px]