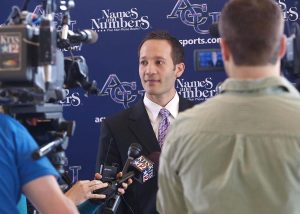 Until last week, fans of Midwestern State University’s nationally ranked men’s basketball team wouldn’t have been surprised for their highly successful coach, Grant McCasland, to be wooed to a plum job in other realms of the NCAA. They were stunned, however, when he was hired March 30 for the open position at conference rival Abilene Christian University.
Wildcat fans couldn’t be happier. It was no April Fool’s Day week joke to see the 2010-11 LSC South Division Coach of the Year wearing a purple tie at a press conference in the Hunter Welcome Center.
McCasland had led MSU to two straight appearances in the NCAA Division II Elite Eight (advancing to the Final Four this March) and a record of 56-12, its home crowds in Wichita Falls averaging more than 3,000 per game. His highly successful two-year tenure at MSU was preceded by a five-year stay at Midland College, where his teams were 143-32, winning the 2006-07 National Junior College Athletics Association national title and finishing runner-up in 2008-09.
But McCasland, the son of a minister, was attracted to coaching in the environment of a Christian university seeking a return to its glory days of men’s basketball. ACU habitually wins the LSC all-sports title, but it has been 23 seasons since the Wildcats have worn a league crown in men’s basketball. Abilene Christian won or shared three straight LSC titles from 1985-87, and last played in the NCAA regional tournament in 1998-99.
McCasland replaces Jason Copeland, who resigned recently after coaching six years at ACU. Copeland’s teams were 65-96, with their best mark a 20-9 record in 2007-08.
Watch ACU sports broadcaster and alumni relations officer Grant Boone (’91) interview McCasland here.