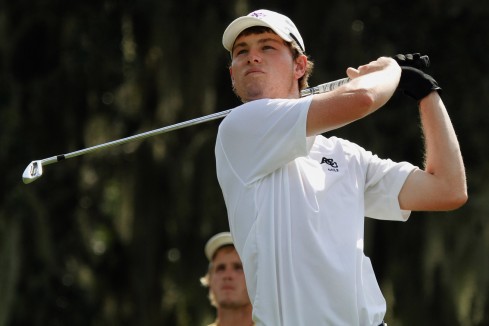 Six-time champion Tiger Woods made news this week when he committed to compete in the Arnold Palmer Invitational, but one other addition to the field also will make headlines when he plays.
Wildcat sophomore Alex Carpenter will become the first ACU student to play in a PGA Tour event when he tees off March 24 at 1:54 p.m. CST in the 33rd anniversary edition of Palmer’s tournament, presented by MasterCard, at Bay Hill Club and Lodge in Orlando, Fla.  Carpenter, who has won six collegiate tournaments since Fall 2010, is one of the NCAA’s top golfers the past two years.
GolfWeek has an excellent video profile of Carpenter’s Most Excellent Adventure here.
The Palmer event has a purse of $6 million and pays the winner $1.08 million, but Carpenter will only be playing for the experience, and as a reward for winning the prestigious Southern Amateur Championship last July. Nearly every PGA tournament provides sponsor exemptions, and Carpenter was one of 19 accepted to the 2011 Palmer event, along with 1993 and 1998 U.S. Open champion Lee Janzen; 2003 British Open champion Ben Curtis; and Chad Campbell, who won the 2004 Palmer tournament and also happens to be the brother of Carpenter’s ACU golf coach, Mike Campbell (’91).
Carpenter’s exemption had nothing to do with his coach’s brother, and everything to do with his remarkable performance in the 104th Southern Amateur last summer.
Just two months after finishing his freshman year at ACU, the native of Little Rock, Ark., sank a 65-foot eagle putt on the 17th hole on the final day of the Southern Amateur, a storied tournament that counts Bobby Jones, Hubert Green, Lanny Wadkins, Ben Crenshaw and Justin Leonard among its past champions. Carpenter shot rounds of 70-67-70-66–272 to finish 16 strokes under par, including an amazing 30 on the back nine of the final round. His birdie putt on the 18th green lipped out, or he’d have shot 65 for the day.
That win gave him a spot in the U.S. Amateur Championship, where he shot 11 over par and missed the cut.
He and his twin brother, Adam, signed to play for ACU after helping their Arkansas Baptist High School team capture four straight Arkansas state titles, with Alex winning medalist honors each time.
Alex won one fall tournament his freshman year at ACU, and three more last spring on his way to helping the Wildcats to a Lone Star Conference title and honors as LSC Player of the Year and Freshman of the Year. He also won the 2010 Phil Mickelson Award from the Phil and Amy Mickelson Foundation as the most outstanding freshman in NCAA Division II men’s golf.
Carpenter can say “hello” to the namesake of that award next Thursday; Mickelson is one of those in the Palmer field. Woods won in 2000, 2001, 2002, 2003, 2008 and 2009, and Ernie Els is the defending champion.
The most notable former ACU golfer is India native Jeev Milkha Singh, who led the Wildcats to the 1993 NCAA Division II championship before turning pro. He plays on the European, Asian and PGA tours, and has won 18 times, including the 2006 Volvo Masters.
Follow Carpenter’s progress in the Arnold Palmer Invitational here and at acusports.com. The event will be televised by the Golf Channel (Thursday-Friday) and NBC Sports (Saturday-Sunday).